The Alchemy of Design Thinking 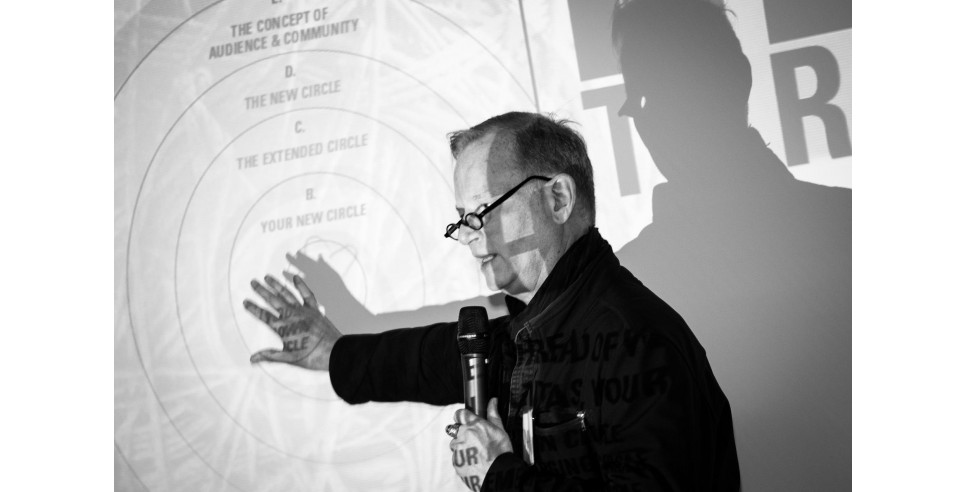 Tim Girvin is well known for being an award-winning American designer, but his talent takes many shapes and forms. Calligrapher, illustrator, writer, public speaker and photographer, these professional titles do little to capture the essence of a man who has become legendary.  Oft-considered to be a designer’s designer, other designers revere him to the extent that some imitate him—his gestures, his philosophy and even the way he speaks. And how does Girvin speak?

The language that Girvin uses to engage in conversation probing what is mysterious and paradoxical is defined as Girvinese. Contrarian by nature, Girvin will often set forth multiple, contradictory truths for you to ponder. By doing so, he invites you to take a powerful glimpse into his world and into his psyche so you can see his way of thinking. Once you have experienced his world, you will never think exactly the same way again. As a thinker, he is that powerful. And your way of thinking has just become richer, grander and more meaningful.

Forget for a moment that Girvin is a public brand that has evolved to include its own lexicon. The term Girvin conjures variations as an adverb, a proper noun, and an adjective.  When something is a “Girvin,” it means it has hit a mark of excellence. And if something has been “Girvined, it means the concept has been worked, and honed and finessed to achieve its finest shape and form. Despite the perception of his public brand, Girvin is also a very private person who has just happened to have taken his inner depth and translated it to some of the most iconic brands in the world.

Anyone who knows Tim Girvin, personally or remotely, knows he has a fascination for crows, ravens, jays and magpies—the entire clan of corvids. To Girvin, crows flying in the air symbolize a black alphabet.  This is an alphabet that translates into many languages, emotions and layers of thinking. “Crows are able to articulate their demeanor and offer gestures telegraphically,” he says. He has a love of ravens and crows; they’re everywhere. Everywhere Girvin goes, anywhere in the world, in Mongolia, Tibet, Turkey, Bhutan, India, Japan, he finds these birds or the birds find him. Usually it’s a mystical encounter.

“These are hyper intelligent birds,” he said. “The raven has been part of my spirit since I was very young.”

He describes his first encounter with crows at age ten. He had a mystical experience with a coven of crows. Alone, he had hiked into an old growth forest tucked in the side of a mountain in Idaho. As night fell, he heard a strange sound and could not fathom what it was. He stopped and stood still in the dim light of this dark forest. He encountered a coven (assembly of crows) engaged in a ritual.  Above he encountered a giant mythological raven.   Girvin describes the experience as a “profound discovery for me.”

To this day, all corvids, be they ravens, jays or crows, stay with him. He has a drawing capturing the experience.  Raven stone shows the approach he made in the forest to this ring of black birds with a giant bird looking on.

The whole notion of mysticism, ravens and crows is more than observation and musings about birds; it is a profound way of looking at the world and experiencing life-changing design transformation.

Girvin’s collaborations with other design notables are famous.  Early in his career, he collaborated with the celebrated American painter and sculptor George Tsutakawa, who was best known for his bronze fountain designs. Girvin was mentored by Tsutakawa and immersed himself in Sumi-e workshops (classical Japanese/Chinese painting) to become a master at Brush-in-ink painting. After years of mastery, Girvin delivers rapid fire imagery in brush strokes that are so fast and lively that they capture the essence of a product, a brand or a life.

Girvin remembers spending time with Tsutakawa drinking sake while painting crows in flight. The deft touch of a rapid brush stroke reached into the soul of the birds in a few brush strokes. “This is the beauty of the design process,” Girvin notes. “By reaching in and capturing in a few strokes the essence of an object, living or not, the image becomes more than mere design. It’s true magic. Pure alchemy.”

There is an even deeper layer to Girvin’s thinking that is somewhat evidenced in his affinity for death imagery.  There are several artistic renditions of skulls sitting on his desk in his studio.  He wears a black and red woolen Alexander McQueen scarf that bears the striking images of skulls. A sculpted metallic emblem of a skull is emblazoned into the upper torso on the back of his jacket.  He has a huge collection of skulls from all over the world and most notably from Tibet, Indonesia and Mexico.

Instead of death symbolism representing the macabre, the exploration of death is a life-giving force.  This exploration began with the death of his youngest brother Matt Girvin, who perished in a helicopter crash while he was on a Unicef rescue mission in Mongolia.

Girvin immersed himself in the process of grieving over the loss of his brother Matt.  The immersion opened up a new terrain to be explored. His exploration took him to Tibet; spending time with Tibetans, he came to embrace Impermanence as an approach to life.

He notes that being around death increases the ever present reality of Impermanence. “You face loss,” he said. You go head on into it.” In his journey he experiences the release of one’s self from the stuff. “The grief journey is one journey everyone has to take,” Girvin notes.  “Those who truly trust the grieving process become more joyful and are able to fully experience life. “

His creative work for over forty years has been going deeper inside of something than anyone who is ordinary, or just looking to get by, including Girvin’s frank imitators, could fathom.  In everything Girvin does, instead of only probing in the deep, he is there experiencing every nuance to discover full meaning, context, shapes and form.

What does Girvin’s penchant to socialize with crows and collect skull imagery have to do with design?  His high level of design thinking is the dominant thread woven through a passionate 40+ year career. The Girvin way of looking at the world is one of perpetual curiosity.  No small thing escapes his notice and, like the crows, his hyper-intelligent and rapt attention is given to every detail.  He finds meaning in everything and can translate this meaning into some of the most stunning visual renderings that have the power to transform the individual viewer and the world.

Take his client relationships. Even there he takes a contrary path. He pushes for the truth. He will push further into client relationships so he understands the mission, delving deep.  Girvin’s creative process is an undying and relentless pursuit to unearth the soul of the brand.  His fascination with revealing the soul of the brand drives him to learn a palette of emotions inherent in the brand:  fear, happiness, joy, sorrow, the vibe, the culture, the character and how the energy in the brand ripples out to touch the world.

“You can build a business, but there is more,” Girvin said. “You can unearth the soulful richness of a business instead of allowing the business to become a transactional emblem—a badge to money and nothing more.”

Returning always to the crows, “Crows are tricksters,” Girvin said.  “Crows are very social and they will build relationships with humans. When you develop a relationship with a crow, you learn lessons. Playful, complicated, they will captivate your attention. They teach us by offering puzzles to some seemingly complicated situations that might not have had answers until now. The crows present various ways of looking at things—ways of thinking and of doing things you had not considered before.” 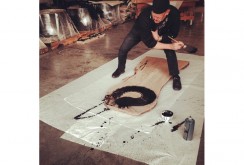 Known for his exemplary commercial portfolio, Girvin designs many things.  In his studio, he has designed tables crafted from industrially-reclaimed timber, long horizontal sheaths of wood showing the true grain, knots and separation of grain in the wood.  Along the smooth grain, there is the pattern and imagery of a profound level of thinking. Giant symbolic brushstrokes render concepts of [circle] for holism, [the whorl] for... 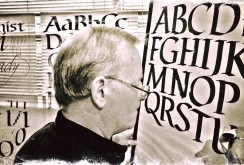 Girvin | Strategic Branding and Design lives, works and plays across a rich tapestry of creative projects. GIRVIN named and created the Yogurt Culture Company — a wholly new farm to city fresh yogurt restaurant in NYC on Park Avenue, just south of Grand Central Station.  Tim Girvin personally designed the original logo for Kettle Brand — in 1978, a small company that started from the back of a truck and is now a global enterprise... 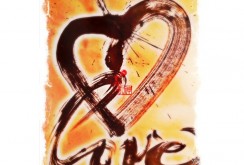 Girvin has always been held in awe by many of his colleagues and peers. Years ago, when I was having lunch with the owner of a major ad agency, Girvin’s name came up in conversation.  He said, “Girvin really is who he says he is. He is a different thinker and an extraordinary talent.”

Despite Girvin’s success, he carries himself with a certain humility. He knows shopkeepers, restaurant owners and waiters by first name and is... 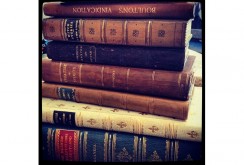 The Seattle office of GIRVIN maintains and grows a multi-thousand volume collection of books on design. There is a wide range of reference works that has taken multiple decades to collect.  There are rare books, ranging from signed and numbered limited edition books, to rare books that are centuries old. A hand-illuminated Quran reside beside an ancient cuneiform ceramic cone from ancient Mesopotamia, a first century Greek tutelary epigraph...

Building Back Better: the Department of Health and...

From the complexities of the ambitious public-private partnership called Operation Warp Speed, to ...