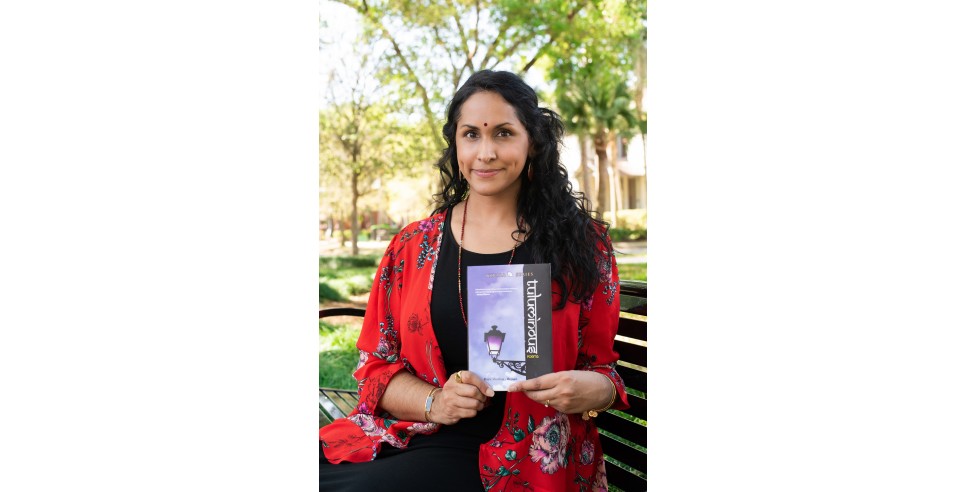 Proceeds will be used to support projects addressing youth homelessness and the arts. Your support is deeply appreciated. Tuluminous is available here.

"Rajni Shankar-Brown’s strident voice sings with social justice, one that is rooted in her bicultural experience, imbued with the ancient holy music of Sanskrit, and the luminosity of being alive in a brown body. Her profound empathy and expressions of sincerity power the flight of these poems, some of which are meant to be breathed into the air as performances, and others to be held close to the heart in intimate reflection. It’s clear the world must embrace diversity and redress inequality—Tuluminous is a marvelous and meaningful testimony of the power of language to heal and transform."

"A festival for the senses, the poetry of Tuluminous sparkles and undulates, roars and radiates, soothes but illustrates that we must never be soothed into stagnation. Rajni Shankar-Brown: poet laureate of the just society."

"Rajni Shankar-Brown has given us not only a wonderful new word—tuluminous—but an equally inventive collection of poems. The verses glisten with the freshness and clarity of someone accustomed to swimming in two rivers, East and West. Awash with earned epiphanies, these poems are best sipped, not gulped. Better yet, sit back and them let wash over you like a cooling Monsoon rain."

"The author’s note for poet Rajni Shankar-Brown identifies her as a justice warrior. The poems in Tuluminous, her first collection, demonstrate again and again how apt that term is. Shankar-Brown is at war against: toxic masculinity, the beauty industry, unimaginative education, police violence, racism, Donald Trump, and other scourges. But among the weapons of her war are: love, chai, coffee, yoga, children, art, and language. “Be careful/The moon whispered in a thousand languages,” she writes in “Estrangement,” “Puddles can become oceans.” The movement in her poems surprises. “Brewing Chai: How Do You Sip It?” appears as safe as morning television, until it isn’t: “I am 9 yards of golden silk,” she writes. Next line: “Unraveling.” “I am more than a red dot between midnight eyes,” she reminds us. In her world, spring, a season of growth and renewal, is when women “die to look like Barbie.” She moves easily from invective to affirmation, from lyric to attack. She reminds us what it means to be a person of color in Trump’s America, but also what it means to be a person of strength: “To the man who accosted me today at a Winn Dixie,” she warns, “we will rise.” On the scents, and the righteous sense, that emanates from this sumptuous bouquet, the reader, too, will rise."

—Tim Tomlinson, Author of the poetry collection Requiem for the Tree Fort I Set on Fire, and the collection of short fiction, This Is Not Happening to You.

"In Tuluminous, poet and scholar-educator Rajni Shankar-Brown elevates my lyrical senses. Her voice is so distinct, her observations so rich with detail and light, I find myself wrapped into her lines, not just reading them. She also elevates my sensibilities, like oxygen on the fire of my activist spirit. Tuluminous is what happens when poetry moves forward."