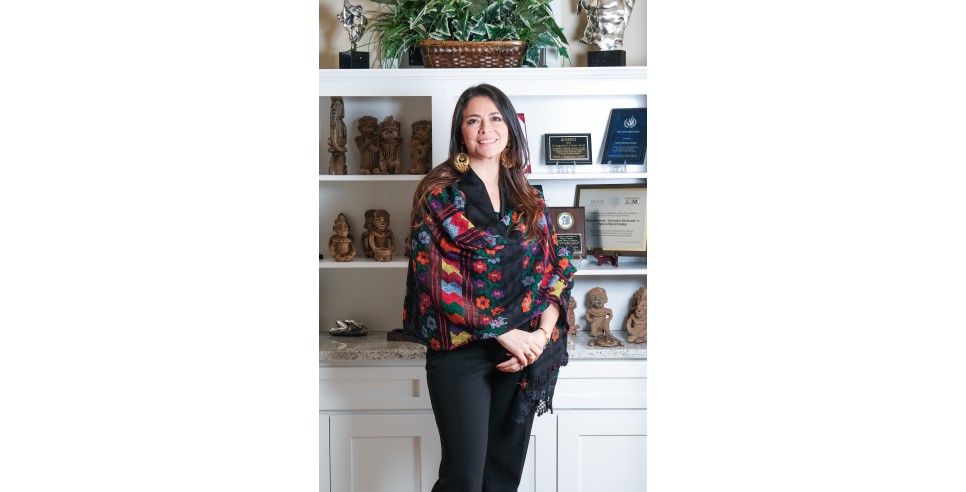 Julieta Altamirano-Crosby is quick to mention that it had never crossed her mind to move to the United States. She was born in the town of Dos Caminos, later moving to the tiny town of El Ocotito in Guerrero-Mexico when she was six. Offering a little bit of paradise, El Ocotito was a safe place for children to thrive because, in large part, everyone looked out for the children. She describes her childhood as idyllic and peaceful, full of folklore, laughter and song. Her days were spent playing with other children outdoors in the open air made warm under a constant sun. She recalls going to elementary school with her oldest brother Nicolas, where she played the drums and basketball.

The tight knit community of El Ocotito also had a middle school where Julieta would have gone, but her parents wanted to give her a more challenging opportunity.  Because El Ocotito was a rural agricultural town, its middle school focused on teaching children agrarian skills and crafts indigenous to the area, such beekeeping and how to make natural products that were later sold by the students in the small town. When she reached the middle school years, her parents decided to send both Julieta and her brother to school in Chilpancingo de los Bravo, the capital and second-largest city of the state of Guerrero.

Everyday Julieta and her brother Nicolas took a taxi and traveled an hour to reach school in Chilpancingo, where students spent more time in the classroom focusing on more rigorous academic programs. Julietta recalls, “We woke at 5am every single day and to arrive early at the taxi area, so then my brother and I could walk to the school.” Julieta and her brother were always first to arrive at school. They purposefully taxied to school early, just in case something like a flat tire or car problem happened on the road. “You had to be early,” she says.

Travel to Chilpancingo always presented the possibility of danger. Anything could happen on the road. It was a huge sacrifice for her parents to send her to school so far from home, but for them it was important to see that their children would be educated. While Julieta’s mother, Matilde Navarrete Leyva, had gone to middle school, her father, Nicolas Altamirano Muñoz, had only a third grade education. Tremendous courage and a deep religious faith gave her parents the strength to give their children the opportunities that they had not been given. Julieta’s father always told her brother to take care of his sister. She describes her father as “her hero,” someone whom she admires as both a father and a leader.

Julieta’s parents’ influence went beyond making the choice for her to have to travel far to attend a more promising school.  Her parents told her to never forget where she came from. Her parents stressed honesty, treating people with respect, and having security in one’s own self. “You have to be humble,” they told her.

During the first days when she taxied all the way to Chilpancingo, she did not fully understand why. After she settled into the grueling travel schedule, she began carrying her basketball along with her books. By that time, she was on the team in middle school and later in high school and college; she ultimately played for the Guerrero state basketball team, the equivalent of a Division One Team in the U.S.

Soon she came to learn that she was never really leaving behind her small town of El Ocotito. Instead, she was taking her family’s values on the road with her.

As a young woman living and working in Mexico, Julieta met her husband, Patrick Crosby. They married in Mexico’s Pacific coast resort city Zihuatanejo and lived there for three years. Patrick was born in Lynnwood, Washington, and is a Native American, of the Cowlitz Indian Tribe. After traveling back and forth for three years, they finally decided in 2009 to move to the Northwest. The transition into American culture was like being on the road again from El Ocotito to Chilpancingo. It wasn’t easy living in a climate and culture so different from the gentle warmth of Mexico. By this time, Julieta had a young daughter, Daniela, and was a mom raising her child while navigating the complexities of the public school system. She saw the gaps between what worked and what didn’t work in how Hispanics were assimilated into the culture. “I made the decision to learn English,” she says. “When I came to live in this country (I never thought about it), I was worried to learn English.”

Mastering the English language seemed to be a minor feat within the context of her impressive academic credentials. Julieta received her Master’s in Communication Science at the Complutense University of Madrid in Spain and her Ph.D. in Social Communication from the University of Havana in Cuba. She earned her Master of Education (MEd) in Educational Leadership from Seattle Pacific University in 2018.

She became very involved with her daughter’s school, and by working with a lot of committees on multiple levels, she learned to successfully navigate the school system. She worked with all of the community and began to see that she could make a difference on a higher level.  She saw that the teachers did not know or understand the Hispanic culture, and therefore could not know how to meet the needs of their students.  She established herself as an activist and advocate for human rights to voice the needs of the culture. Her ideology was grounded in her desire to build relationships. “If you don’t have the ability to build relationships, then you cannot accomplish anything,” she says.  “I am the VOICE, but I want to bring the people’s VOICES to the table.” It was only a question of time before she started doing more bold things.

Governor Jay Inslee appointed her to be a commissioner on Hispanic Affairs, where she serves three counties: Snohomish and Whatcom, Skagit Valley Counties, and works with the community and all related agencies and stakeholders. “Everything that happens regarding Latinos is very important,” she says. “We are the advisors for Governor Inslee.” By working to build relationships and to create policies, Julieta was soon on the fast track for becoming a high profile public servant.  Governor Inslee also appointed her to the Board of Trustees for Humanities of Washington. She is the only Latina who is part of that Board in Washington. Not many people are aware of Humanities Washington and what they do to raise awareness for cultural identities by using the vehicles of art and education. Her work is closely tethered to the belief that a person’s identity and growth are closely tied to their understanding and appreciation of both culture and language.

In 2012, she founded the nonprofit organization WAGRO to assist Latinos and Indigenous Mexican students and their families to achieve academic success in school. Today she is president of the WAGRO Foundation and works to break down barriers to education for Latinos in Washington state and Guerrero, Mexico. She is the radio host of “Conexion Contigo” (“Connection with You” in Spanish) for KSVR 91.7FM Skagit Valley Community Radio. She also is a member of the League of Women Voters of Snohomish County, the Advisory Board of Center for Washington Cultural Traditions and the Snohomish County Commission of Human Rights. Julieta was recognized by SPIRIT 105.3 as an “unsung hero” and was the Snohomish County Human Rights Award recipient in 2017.

The lessons learned on the road from El Ocotito to Chilpancingo continue to travel everywhere with Julieta Altamirano-Crosby. Making the decision to run for a seat on the Lynnwood City Council made her nervous, but only in the very beginning. She remembers doorbelling in Lynnwood and feeling self-conscious because English is her second language and she never knew who would answer the door. Then she remembered that her parents prepared her for this journey. Driving to another town for an hour to go to school and experiencing the uncertainty of the road prepared her for a challenging life. She learned everything from this experience. “It’s all about having courage,” she says. In November 2019 Julieta won a position as a council member for the city of Lynnwood. She is the first Latina to hold that office in Snohomish County.

" A warm smile is the universal language of kindness."