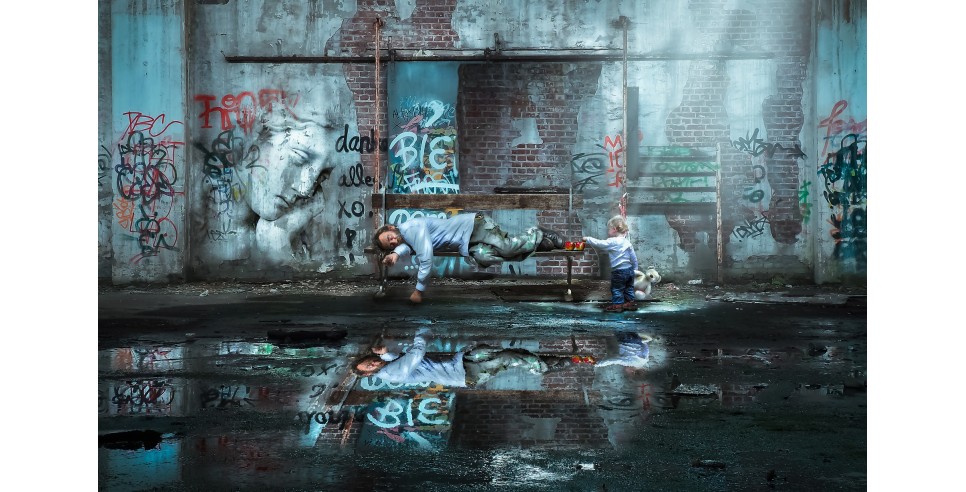 The cashier at Bartell’s Drug Store asked me if I wanted to round up my tab by adding a small donation to the Salvation Army to buy toys for tots. Even though rounding up my donation was nearly a buck, I said yes. Giving a buck has nothing to do with who I am—a working-class kid from Yonkers.  I told the cashier I had seen the Salvation Army Headquarters in New York City. The building’s brass plaque was inscribed with words that moved me. I could not remember the exact words, but I knew what they meant—every human being is worthy of being treated with dignity.

Somehow what I said about dignity resonated with the cashier. She looked into my eyes. I saw tears in hers. I knew what her tears meant. There doesn’t seem to be enough dignity to go around these days. A lot of us have been short-changed and rounding up the tab for our small purchases doesn’t make up for it. Both of us are footing the same bill. And it is too high a price to pay.

I didn’t tell the cashier I was the kid who took field trips in big city buses with noisy wheels and oily smells triggered by the congestion of sitting too long in a woolen Catholic school uniform. There were a lot of us sweating on the bus. Riding on a bus through the Bowery was a good thing and as educational as a visit to the Tenement Museum. From the time when we’re tiny tots, we’re told to be good otherwise we’ll wind up in the gutter. The Bowery was more than a long street or a neighborhood winding north to the East Village. Land of the poor, the drunk, sick and nearly dead, the gone, we working-class kids have a deep-seated fear of squatting on the street.

The bus slowed through the thickness of idle bodies sprawling along the sidewalk, some spilling over the concrete lip into the road, others strewn one step up from the curb. The meaner men leered at us—schoolgirls looking out at them from the bus window. They treated us as if we were on adventure in an amusement park and put on a freak show for us. Grinning and red faced, banging on the sides of the bus, they reached toward the bus windows, trying to grab almond cookies and pint-size cartons of milk from our hands. They looked too happy to be called bums.

I had always thought the Bowery was a funny-sounding name, sort of like the name of the city where I grew up, Yonkers. Reminders of the early Dutch settlers are everywhere in lower New York. Yonkers was named for Adriaen van der Donck, who was a young Dutch lord, a Jonkheer or Jonker. When the Dutch settled Manhattan, the Bowery was named Bouwerij (bo-we-ray), the Dutch word for farm. And farm indeed it was until the area took a turn for the worse during the latter half of the 19th Century and came to signify wasted lives. Notorious flophouses, speakeasies and gin halls, these buildings were rundown and looked grimy. Anyone could rent a room for a night and drift off into the kind of sleep that offers no hope for a prayer or a dream.

I want to believe the Bowery, as we once knew it, belongs to a bygone era but it’s still too near to me to let it go. I see poverty everywhere. Neighborhoods like the Bowery are called called Skid Row, and it is not the place where the poorest of the poor live to manifest their dreams. Skid Row does not conjure the image of the robust hobo and his dog riding the rails on the night train. The people who lie in the gutter are down-and-out, and dirty, sick. For them, it’s the end of the line. There is no way out of there. I wouldn’t be surprised if every city in the world has a Skid Row. L.A.'s Skid Row is often called The Nickel; Portland, Oregon has its Old Town Chinatown; San Francisco calls its Skid Row The Tenderloin; and Seattle offers its Pioneer Square district as the original Skid Row.

The term Skid Row came from the Pacific Northwest timber industry and stuck to American culture like the festoon-streaks of dried mud that clung to men’s britches in a one-horse town.  Seattle’s historic Pioneer Square is generally thought of as the original Skid Row. Skid Row came about when a logger was fired; he was sent down the skid road, never to be heard from again. Even before the Great Depression, Seattle’s Skid Row had streets clogged with mud and an oversupply of saloons and whore houses, a sorry sight welcoming loggers, railroad workers, and vagrants—the low-life who didn’t care too much about being dirty and poor.

While the Bowery was known as New York City’s Skid Row, today it is a hot market for luxury real estate developers. The Bowery wends through several neighborhoods in Lower Manhattan, from Chinatown on the south to North of Houston Street, (which wasn’t fancy and called NoHo when I was a kid). The new luxury building located at 347 Bowery used to be a Salvation Army shelter. The stacked townhouses are priced between $5 and $10M. One triplex penthouse is in the $10M+ range.  The building housing another former Salvation Army shelter at 223-225 Bowery was lost to a $30 million sale. The new site is the location for the Ace Hotel and has luxury condos on top.

The Bowery’s low-income tenants have been putting up a mighty fight to stay in their rent-stabilized tenements, but too much money is being put up for a land grab. The new landlords have been doing very mean things to low-income tenants, forcing them to move out. It takes a lot of money for low-income tenants to win a battle against real estate developers and they don’t have any. The Bowery is Skid Row no more.

Betwixt and between New York City and Seattle, the former sites of Skid Rows are quickly becoming occupied by luxury homebuyers and high-end office buildings. Even though the poor have been forced out, they have not gone away. Skid Row has metastasized everywhere. There are more homeless than ever, but they have splintered off into small clusters. They live in the most harsh and frightful way. Tucked under blankets, tarps and sleeping bags, in between alleys and in the empty spaces of retail parking lots, loading docks, storefronts, and on the greenbelts along side freeways, the homeless have become mobile. Here today, chased away by the cops and gone tomorrow, Skid Row is perpetually on the move. Some well-heeled people liked having a Skid Row because it kept the downtrodden in their place. And when it kept them confined to one place, the well-heeled knew exactly where not to go, so they would never have to see them.

But we do see them. We see the homeless with our own eyes and hear what they are saying with our own ears. We have to wonder why the job reports are so heavily politicized, citing record numbers of low unemployment, when there are so many more people living on the street. Even if you’re good, you can still end up in the gutter. All it takes is one tragic misstep leading to a bad sequence of events and it can happen to any one of us. You don’t end up becoming homeless without suffering from a broken heart.

There was a quiet dignity the way the Bowery used to be a refuge. Being homeless means encountering rejection everywhere in the world, but in the Bowery the homeless could find a friend. The Bowery offered a sense of place, a genuine community, somewhere to live. The Bowery, or any Skid Row, protects human beings who have been tossed out as garbage. Many missions and Salvation Army shelters have labored to stop human beings from dying on the street. Now that the homeless have been evicted from Skid Row, we see them up close and personal every day. All of us have walked along a street only to step around a prone body. We have no way of knowing if the person is dead or alive. Many of us care. We want to help, but we don’t know what to do. The Bowery now dwells among all of us.

“WHILE WOMEN WEEP, AS THEY DO NOW. I’LL FIGHT.

WHILE CHILDREN GO HUNGRY, AS THEY DO NOW. I’LL FIGHT.

WHILE MEN GO TO PRISON, IN AND OUT. IN AND OUT, AS THEY DO NOW. I’LL FIGHT.

WHILE THERE IS A DRUNKARD LEFT.

WHILE THERE IS A POOR LOST GIRL UPON THE STREETS, WHILE THERE REMAINS ONE DARK SOUL WITHOUT THE LIGHT OF GOD, I’LL FIGHT, I’LL FIGHT TO THE VERY END!”   -General William Booth, founder of the Salvation Army

Patricia Vaccarino has written award-winning film scripts, press materials, content, books, essays and articles. She is currently writing a collection of essays NOTES FROM THE WORKING-CLASS. She has written two works of fiction about Yonkers: YONKERS Yonkers! A story of race and redemption and its sequel The Heart of Yonkers (release date April 2020). Book Three in the Yonkers series is in development. She has an audience, of 40,000+ followers on social media. She divides her time between homes in downtown Seattle and the north coast of Oregon.