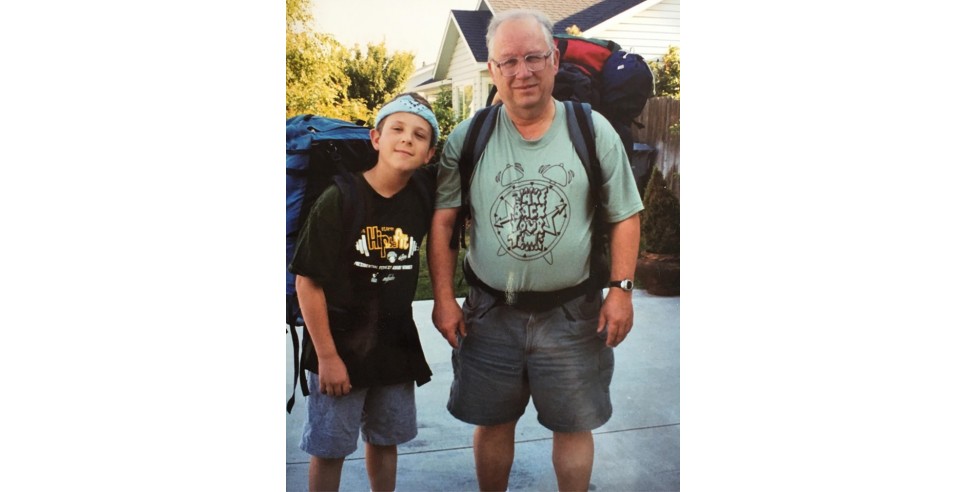 When I was a boy, it seems I was always excited by the prospect of summer vacation.  In the late spring, I’d count the days till the end of school.  My dad worked for the Coast Guard and steadily accumulated vacation days for his years of service.  He had four weeks then and used two of them to serve in the Coast Guard Reserve.  During the other two, we went camping.  He introduced me to backpacking when I was 11, and by the age of 14, I was allowed to backpack by myself, with my good friend, John Ellsworth, first for two weeks in Yosemite, and, in subsequent summers during high school, for up to six weeks throughout the Sierra Nevada.  Our only requirement was to stay safe and call our parents once a week.

I knew that whatever job I landed in would have to include vacation time.  I became a free-lance video producer and could choose how much time I took off, without pay of course.  I thought everyone had at least some time off.  But in 1993, when I made a national PBS documentary called RUNNING OUT OF TIME, I realized my freedom was the exception, not the rule.  I was shocked to discover that the United States, alone among all rich countries, had no law guaranteeing paid vacation time, or even unpaid time.  By contrast, all Europeans enjoyed at least four weeks off by law and so did some residents in poorer countries like Brazil.  I’d been an activist before becoming a filmmaker; I couldn’t let this deplorable situation stand unchallenged.

TAKE BACK YOUR TIME

It was nearly a decade later though, that I joined a group of voluntary simplicity advocates to start an organization called Take Back Your Time, to challenge what we called America’s “time poverty.”  We learned quickly that in other areas as well as vacation time—sick leave, family leave, etc.—the US was far behind its peers.  We advocated paid family leave, paid sick leave, a shorter working week and other ideas.  Our organization grew quickly.  The first Take Back Your Time Day on October 24, 2003 resulted in activities in 200 cities, some 500 separate media stories and important support from organizations like the Massachusetts Council of Churches, which encouraged all of its pastors to preach about the need for time for life.  I’d edited a handbook for the day, with more than 30 distinguished contributors, including Juliet Schor, who’d written the brilliant volume The Overworked American.  I was also able to write op-eds for the New York Times and Los Angeles Times that were well received.

Since that time, Americans have made some progress. Several states now have paid family leave laws; Washington State’s is the most generous.  Paid sick leave legislation started in cities, with San Francisco leading the way and many others following it.  Vacation time, though, seems almost forgotten, a luxury those who have take for granted.  Meanwhile at least a quarter of American workers receive no paid vacation leave at all, especially our poorest workers.  In fact, Americans today get—or take—less vacation time than a generation ago.

Expedia has regularly polled workers regarding how many vacation days they give back each year—the average is about four.  But a poll that Take Back Your Time conducted in 2007 was even more telling—the median paid vacation time for Americans was barely more than a week.  Half received or took even less.  Even the notoriously hardworking Japanese got more.

In 2008, I watched C-Span with excitement as Florida representative Alan Grayson mentioned Take Back Your Time in Congress and advocated a paid vacation law.  I worked with Grayson to develop his bill, a modest proposal offering one to two weeks off depending on the size of the firm people worked for.  I joined Grayson and several members of the Take Back Your Time team for a press conference to launch the bill.  It went nowhere.  FOX News interviewed me about it and accused me of “trying to turn America into a 21st Century France.”  Oh, the horror!  As if I were demanding that all Americans appreciate good food and wine.

Undaunted, I tried again a few years later at the state level.  Gael Tarleton, my state representative, offered a paid vacation bill to the Washington State legislature in 2014 and 2015, just after my film THE GREAT VACATION SQUEEZE aired on many PBS stations.

Again, the bill was modest, offering an hour of paid vacation time for every 20 hours worked, up to 12 days in a year.  Calculating time using hours worked would prevent employers from cutting hours to avoid providing any paid vacation time at all.  Physician Sarah Speck and other advocates testified for the measure in the legislature.  The business lobby stood in fierce opposition, suggesting that it would bankrupt small business, even though we provided evidence that such a bill would be a boost to the state’s economy and increase productivity.  We lost both times—while the bill had 4-3 support in the Labor and Industries Committee, it was not sent to the floor of the state House.

“Workers across the nation have been working too hard without enough time to rest and recharge or enough time for family and important life events. Every other major nation recognizes the necessity of Paid Personal Time. We as a country must get there, and New York City will lead the way."    – Mayor Bill de Blasio

But hope springs eternal.  Recently, I was contacted by members of Mayor Bill de Blasio’s staff in New York City.  In May, 2019, they introduced legislation providing two weeks of paid vacation to all city residents.  They have strong support from the city’s unions, something that wasn’t true in our Washington State efforts, and expect the bill to pass early next year.  As we spoke, I was very impressed by their well-thought-out plan and their strategy for passage.  When the bill does pass, New York City will be the first jurisdiction in the US (outside Puerto Rico, which provides three weeks by law) to require paid vacation time.

I am hopeful that Seattle will be number two. I currently have commitments from three of our nine city council members to support paid vacation legislation, which they will introduce early in 2021.  I believe that at least three other council members will support them, providing a clear majority for passage.

AN ISSUE FOR THE DEMOCRATIC DEBATES

Once these cities do pass such legislation, I suspect the idea will take off elsewhere, as paid sick and family leave did.  One thing that surprises me is that none of the current Democratic presidential candidates has spoken up for vacations, even though former Labor Secretary Robert Reich says it would be a winning issue, and different polls have shown at least two-thirds support for the idea.

Just before the 2016 elections, I participated in phone calls with Elizabeth Warren’s staff and other work-life balance advocates.  The Massachusetts senator was planning to introduce a kind of omnibus paid-time-off bill that would have offered Americans 30 annual days of paid leave, including federal holidays, sick days and vacation time.  She had good reason to believe that Hillary Clinton, if elected, would sign such a bill if Congress passed it.  I was thrilled by the prospect and found the plan excellent.  Workers could use the paid days as they chose, though of course, vacation days would have to be scheduled in advance with employers.  It would go a long way to reduce stress and improve health in the US.  Of course, Clinton lost and the idea seems to have been forgotten.

I am truly surprised that Senator Warren has not raised this issue in the debates, as I believe it will be extremely popular with voters, and especially, Democratic primary voters.  It would also appeal to the working-class voters who voted for both Obama and Trump and are straining under long workweeks for modest pay.  Our polling in 2009 showed especially strong support for vacation time among young voters, Hispanics and African Americans, key elements of the Democratic base.  I think new polls would show the same.

CHANGE IN THE WIND

Meanwhile, as Americans continue to toil without respite, other good ideas are springing up.  Jon Steinman, who once directed the Congressional Ethics Office, has begun a campaign for a four-day work week.  Lest this seem utopian, readers should be reminded that the US Senate passed a thirty-hour workweek bill back in 1933.  Thirty, not forty.  Now, 86 years later, with five times the productivity we had then, a 32-hour week should be a slam dunk.  It would add years to American lives, reduce health costs, increase happiness and cut greenhouse gas emissions (a factor demonstrated by studies in Sweden).

On another front, the US Public Interest Research (PIRG) groups, started by Ralph Nader in the 1970s, are looking at a campaign for changes in working time and quality of life.  “Should the economy serve our needs or should we serve the supposed needs of the economy?” writes Evan Preston, Senior Director of New Economy Programs for US PIRG.  “That is the profound question posed by Take Back Your Time and the movement of people asking whether we need to work so much. We enjoy abundance in America. Yet we remain locked into the logic that the only way to have better lives is to produce ever more stuff. Debating how much we should work is a worthwhile discussion to have as it focuses on how to improve wellbeing for more Americans.”

Take Back Your Time Organization www.takebackyourtime.org

Vacation matters, for both happiness and health http://people.umass.edu/econ340/vacations_health.pdf

Gael Tarleton offered a paid vacation bill to the Washington State legislature in 2014 and 2015 https://housedemocrats.wa.gov/blog/2015/01/20/mandatory-paid-vacation-introduced-in-the-house/

Labor Secretary Robert Reich says it would be a winning issue https://prospect.org/article/national-minimum-vacation/

Jon Steinman has begun a campaign for a four-day work week https://www.washingtonpost.com/us-policy/2019/07/11/thank-god-its-thursday-four-day-work-week-some-want-bring-us/

US Senate passed a thirty-hour workweek bill in 1933 https://www.alternet.org/2013/04/when-america-came-close-establishing-30-hour-workweek/