Is Ahed Tamimi the “Joan of Arc” of Palestine? 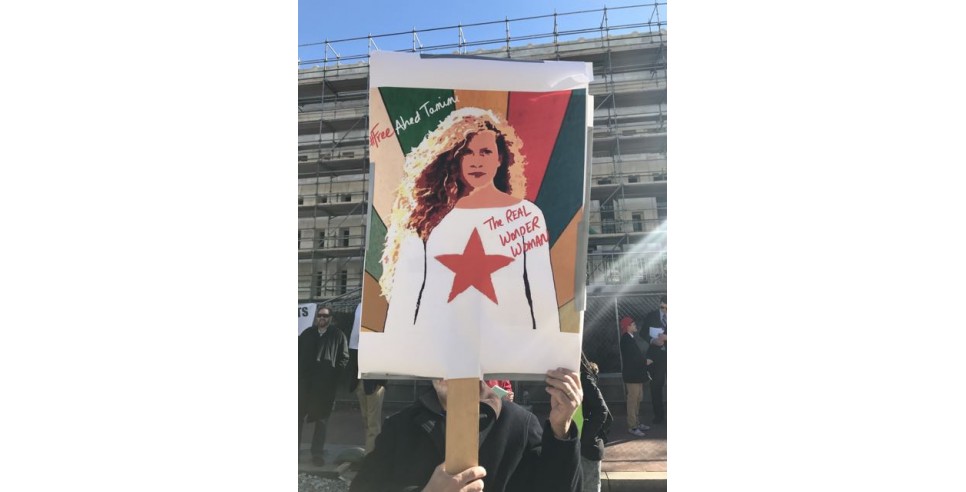 Would you be appalled if the police broke into your home in the middle of the night, and handcuffed, blindfolded and arrested your minor child and threw her into jail?  Of course, you would!  According to the American Friends Service Committee (AFSC), each year some 700 Palestinian children are arrested, detained, interrogated, and prosecuted by a military court system that allows physical abuse of these young people. Currently, there are about 300 Palestinian children (ages 12 to 17) being held in Israeli jails and prisons. One of them is Ahed Tamimi.  On December 19, 2017, she was arrested at 3am in her parents’ house in the small West Bank Palestinian village of Nabi Saleh.  Why?

Four days earlier, on December 15, Ahed learned that her 15-year-old cousin, Mohammed Tamimi, had been shot in the face by an Israeli soldier at close range. The rubber-coated steel bullet lodged in his skull and eventually he was taken to a hospital after passing through several Israeli “checkpoints.”  His surgery took six hours and while the bullet was removed, and his jaw reconstructed, some of his skull bones had to be removed, which surgeons hope to return in six months.

When he was well enough to walk, the military arrested him and detained him. There was no lawyer, no parent present during the interrogation. Later that day, he signed a confession that his skull injury was due to his “falling off his bicycle.”  Sadly, this reveals the perfidy of the Israeli authorities. And, some call this Israeli “justice.”  Moreover, the arrest and often brutal beatings of Palestinian children while in jail occurs all too often. Israel is the only “democratic” government in the world to prosecute children (only Palestinians) in so-called “juvenile” military courts whereas Israeli juveniles are tried in Israeli civilian courts.


Initially, Ahed thought that Mohammed had been killed, so, when heavily-armed Israeli Occupation Forces (IOF) came into her family’s yard, she was angry.  Earlier, the town, including the Tamimi family’s home, had been tear-gassed.  On seeing the soldiers approach her house, Ahed (16 years old) and another cousin, Nour (19 years old), told the soldiers to leave. Her rage at seeing the Occupation Forces was tangible.  Ahed’s anger resulted in her kicking, punching, slapping and screaming at one of the soldiers, an officer.

Every Friday after prayers, villagers gather to walk to the spring whose waters and pool once were used by the Muslim families in the village. The nearby illegal settlement (certified as such under international law and by UN resolutions) of Halamish has taken possession of the spring which is on Palestinian-owned land.  These nonviolent Nabi Saleh protests have been going on since 2009.  At times, some of the extremist settlers verbally and physically attack the villagers while Israeli soldiers stand by.

In February of last year, a Veterans for Peace (VFP) delegation accompanied the villagers during their protest. They, too, were attacked, both verbally and physically by several settlers some of whom were armed. One VFP member recalled one settler saying to Ahed, “The next time I see you here, I will kill you.”  Another youthful “settler” in Palestinian Hebron, said to a US citizen who was Jewish, “I am 10, but when I grow up, I will kill you.”  Certainly, not all settlers feel this way but a substantial number do.   The Israeli Occupation Forces (IOF) protect the “settlers” (colonists) who often act with impunity when they physically attack the residents of Nabi Saleh. There are other Palestinian villages who have done popular resistance marches such as Bil’in, Budrus, and Nil’in, whose inhabitants have also been attacked by both the military and settlers. A fact to remember is that massive US aid to Israel subsidizes such illegal settlements -  almost $4 billion a year, about $10 million a day.

Ahed’s story is one that deserves to be told.  So, as noted, on December 19, 2017, she was taken at gunpoint from her home.  Nour, Ahed’s cousin and Ahed’s mother, Nariman, were also arrested and taken to jail.  This occurred after the video that Nariman took of the “slap” was posted on Facebook and later was shown on Israeli TV. There was an outrage among most Israelis at seeing the film.  Some praised the soldiers for showing restraint as they merely walked away after the “assault.” Others said very negative things. Here are three examples:

At the entrance to Nabi Saleh, several messages were spray painted on buildings: “Death to Ahed Tamimi” and another said, “There is no room in the Land of Israel for the Tamimi family.”

A well-known Israeli commentator, Ben Caspit, stated that Ahed’s kicking and slapping the IOF soldier ought to perhaps result in Ahed’s sexual assault in jail, “in the dark without witnesses and cameras.”  He is still at his job in Israel.

Ahed’s story is important but so are the hundreds, if not thousands of other nameless Palestinian minors who have been denied due process in these military courts.  Israel is the only country in the world that prosecutes children in a sham “juvenile military court’ with a judge in a military uniform and with the children shackled in hand and leg chains.  Ahed, her parents and her lawyer asked for a public jury trial but the military court denied that and said it must be a closed trial.  Knowing that she would be convicted, the family and Ahed and her lawyer agreed to the plea bargain: Ahed was given 8 months in prison and credited with time served and fined $1400. Her mother got the same sentence and a fine of $1,725 while Nour got time already served (4 months) plus 16 more days in prison and a $575 fine.

It ought to shock the conscience of all of the members of the US Congress and any president that children as young as 13 and 14 are being incarcerated.  The UN’s Special Rapporteur, Michael Lynk, recently commented that “the deprivation of liberty of Palestinian children by Israel is institutionalized, systemic, and widely spread.”   If this does not stir the moral principles of nearly all Congresspersons, we must ask why. Much of the world understands that under international law, an occupied population has the right to resist occupation even in armed struggle. (see UN Resolutions 3314 and 37/43). “These resolutions reaffirmed the legitimacy of the struggle of peoples for independence, territorial integrity, national unity and liberation from colonial and foreign domination and foreign occupation by all available means, including armed struggle.” (From Stanley Cohen, a lawyer and human rights activist – Reuters, 20 July, 2017.) Yet, the Palestinian people of today largely eschew violence, including “suicide bombings,” as they realize its failure after the First Intifada (uprising) of 1987 and the Second, in 2000.

Israeli officials knew what the backlash would be if Ahed had been sentenced to as many as 10 years in prison.  Nevertheless, arrested at 16, still a minor child, she never should have been given any prison sentence (the same for her mother and her cousin Nour).  Some observers state that the unraveling of the Israeli government is happening. As hard as they try to win more and more support and influence with the help of outside financial support beyond what our Congress provides, Israel’s propaganda campaign against the nonviolent Palestinian-led Boycott, Divestment and Sanctions program (BDS) is not working.  Reports indicate that the BDS campaign is growing stronger and stronger despite the various Congressional and state-sponsored anti-BDS bills that have been introduced and some that have already been passed in 22 states.  In the 1980s and 90s, the racist apartheid South African government, in part, was brought down by an earlier BDS campaign which eventually led to the election of Nelson Mandela as president.

Would most American citizens agree that human rights “trump” immoral, illegal, and unjust actions by Israel’s military and the extremist settlers?  One would hope so. Many of the Palestinians believe, as Frederick Douglass did, “If there is no struggle, there is no progress.”  Or, one might add, without civil resistance, there is no justice, no equality or freedom.  A single word best describes the attitude of a majority of Palestinians, both Christian and Muslim, concerning their struggle – it is SUMUD – remaining steadfast in spite of adversity, including the past 51 years of an ugly and brutal Israeli military occupation.

In reference to the title of this opinion piece, is Ahed Tamimi, a “Joan of Arc?... Is she, as a young girl, woman, doing what the actual Saint Joan tried to do – lead her people to freedom?  Ahed’s father, Bassem, says of his daughter,  “She has done nothing wrong and is fighting for freedom and justice.” He adds, “My daughter is a freedom fighter who will lead the resistance to Israeli rule.”   Moreover, there are segments of Israeli Jews who advocate for human rights for Palestinians and who work to dismantle Israel’s occupation of Palestinian land.  In Israel, lending their support are organizations such as B’Tselm, Breaking the Silence, and New Profile. US organizations seeking avenues to advance a just peace in Palestine/Israel are J-Street and Jewish Voice for Peace.  Interestingly, the comedian Sarah Silverman tweeted on February 16, 2018, her support of Ahed, saying: “Jews have to stand up EVEN when – ESPECIALLY when – the wrongdoing is BY Jews/the Israeli government.”

Currently, this young Palestinian teenager who has become globally known as the face of the Palestinian resistance campaign, remains in prison, another victim of Israeli injustice and oppression. Is Ahed Tamimi the “Joan of Arc” of Palestine? You Decide.

Editor’s Note: William Thomas was in Washington D.C. on March 4, 2018 with other members of Veterans for Peace to attend a protest against the meeting of AIPAC - the Israel lobby - American Israel Public Affairs Committee. Here in the Connector, he shares his insight into the growing turmoil in Palestine and a young woman Ahed Tamini who is being touted as a modern day Joan of Arc.

Post Note: in the Jerusalem Post on April 6, it was reported that Ahed Tamimi was sexually harassed during her interrogation. “Gaby Lasky, Tamimi's attorney, said in a formal complaint to the attorney general that Tamimi experienced "inappropriate conduct" during questioning, including being told she had "eyes like an angel." Lasky further added that, “Tamimi's interrogator threatened to arrest other members of her family should she not cooperate.”

Will Thomas lives in New Hampshire, where he had a lifelong career as a educator, teaching US History and American Government.  Since 1989, he has been an active member of Veterans for Peace and creates awareness for this organization. Will is a vocal and productive activist for many causes related to human rights, fairness and justice. 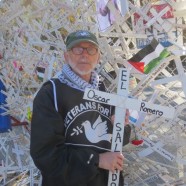 A lifelong educator, Will Thomas taught US History and America Government at Manchester, NH Central High School from 1969 to 2002. He taught courses such as  "Lessons of the Vietnam War," and "Facing History and Ourselves: the Holocaust and Human Behavior." In 1989 he became a member of Veterans for Peace and creates awareness for the Veterans of Peace to people all over the world.