George Lois and Muhammad Ali | On Race and Courage 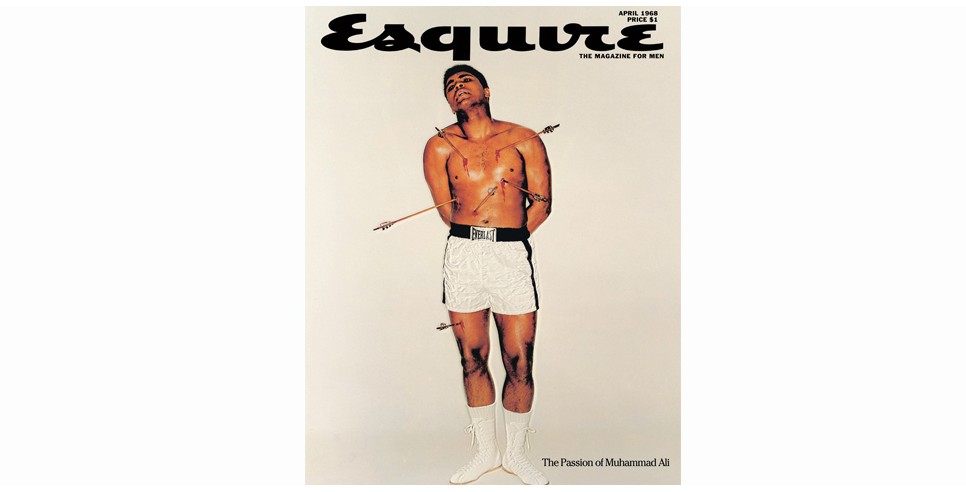 George Lois recently walked me through the process that led to his idea of putting Muhammad Ali in the pose of a martyr on the cover of Esquire Magazine.

Muhammad Ali on the Cover of Esquire Magazine in 1968 sparked a heated controversy. The Esquire cover depicted the famous boxer being pierced by six arrows. How Muhammad Ali came to grace the cover was a deliberate stroke of genius created by legendary ad man George Lois.

There is more to the story…

George Lois met the champ when he was only 18 years old, still going by his birth name of Cassius Clay, and about to go to Rome to fight in the Olympics. Lois met Cassius Clay along with Dick Schaap, who was a great sports writer.  Schaap had already been following young Cassius since he was 14 years old. He had heard about this young kid who was a superb athlete at 13 and made up his own rhyming diction. (Muhammad Ali aka Cassius Clay was always known for his flair for quotable language.)

George Lois and Dick Schaap spent a few days showing young Cassius Clay around New York City before the champ headed off to Rome.  Clay wanted to meet Sugar Ray Robinson who was one of his heroes and owned a nightclub in Harlem. Cassius Clay walked over a hundred city blocks from 12th street to 125th street, went into the club, introduced himself to Sugar Ray Robinson and told him he was going to Rome to fight in the Olympics.  Sugar Ray pushed him to the side and said, “I’m busy now.”

The next day Cassius Clay was almost crying when he told George Lois the story and said, “George, I’m telling you right now. I’m going to be a champion by the time I’m 20 and I’m never going to turn anyone away.”

Cassius Clay kept his word, George Lois recalled. “We’d be driving somewhere and he needed to stop. He’d see a school and say, ‘I’m going to talk to those kids.’  There were maybe 100 or 200 kids. And when they saw him and heard him talk, they yelled and cheered. And he hugged them. He loved people, especially children, and he loved to make them happy. He did that his whole life. I never saw him turn down anybody.”

Cassius Clay went to Rome to fight and when he came home to Louisville, the entire city turned out with a big parade and gave him the keys to the city.  Cassius Clay was told, anything you want… the city is yours. He and his friend went to a place to have a hamburger. Now this was 1960 in the Jim Crow South. He had his Olympic gold medal around his neck. They ordered hamburgers, but the restaurant wouldn’t serve him because he was black. The city was welcoming him home and cheering him for accomplishments, but he couldn’t get served in a restaurant.

Four or five years later, George Lois asked him if he had ever been afraid in the ring.  “Oh yeah, Sonny Liston,” he said. Cassius Clay had plenty of reason to be scared of Sonny Liston who had a reputation for formidable punching power. Yet Sonny Liston lost to Cassius Clay in the 1964 championship fight, and lost again in the rematch when Liston suffered a knock-out in the first round.

George Lois asked him if he was scared of anything else. Cassius Clay was scared of two things: Flying on a plane was one. Everyone knew he didn’t like to fly. His second fear was rooted in the color of his skin and it posed a greater threat than not getting served in a restaurant in the Jim Crow south.

When Cassius Clay was 13, another boy* who was the same age moved from Chicago to Mississippi to live at this grandmother’s house. The boy was in a drug store where he happened upon a white woman and winked at her.  The story spread like wildfire.  A group of white men banded together, took the boy to a lot on the side of the store and brutally killed him. You could see that his face had been chopped up. And there was a picture of it. They had closed the casket so no one would see his face, but when his family came from Chicago to take the boy him, they found the coffin was locked. His mother screamed to unlock the coffin—that’s when the photo was taken. The pictures weren’t shown in any of the major white papers but wound up in black community press and that is finally how the story and the photo were transmitted around the world. Cassius was scared by what happened to the boy and said, “I’ve never looked a white woman in the eyes again.”

After Cassius Clay knocked out Sonny Liston, he announced he was getting rid of his slave name and he would become a Muslim and from now on go by his chosen name of Muhammad Ali. When he became a Muslim, many black people didn’t like him because he converted from being a Christian. Among black people and white people alike, Muhammad Ali was disliked by more than half the country.

In 1967, the hatred was especially acute among Conservatives, Republicans, Richard Nixon, and the reigning powers of the era. The government was drafting 18 and 19 year olds for the Vietnam War. Even though Muhammad Ali was older by then, the draft board called him. He refused to step forward and fight in what he considered to be a bad war.  He was given a monetary fine of $10,000 and ordered to spend five years in jail. He wasn’t allowed to fight or leave the country. His case took four years to work through the appeals process until the conviction was overturned in 1971.

During that time, Ali went to colleges and other groups to speak out against the Vietnam War.  All those years while he wasn’t boxing, he continued to stay in shape. George Lois called him up (they had worked together before) and told Ali he wanted to put him on the cover of Esquire Magazine posing as St. Sebastian, who had been a Roman soldier before converting to Christianity.  Lois told Ali to bring his white boxing shorts and his shoes to a photo shoot. Lois’s crew prepared arrows that looked like they had blood on them and suspended from plastic wire to make them look like they were stuck to his body. George Lois had done research on dozens of paintings of St. Sebastian and found one at the MET. Lois told Ali, “I want you to pose simple and strong, two arms behind your back and your head turned back in agony.”

When the Esquire cover came out, it exploded in America. Today, it’s on display on the Museum of Modern Art. People remember where they were the first time they saw the cover. People later told George Lois how the cover changed their life because they were no longer embarrassed and ashamed about their opposition to the draft. More than being an inflection point for the three big issues of the times: Race, War and Religion, the image became iconic because it told the truth. It showed the courage of a man who had the guts to give up millions of dollars rather than to fight in a war he didn’t believe in. Looking back, George Lois reflected, “If you believe something is right, then you have to stand up for it and fight.” 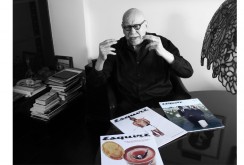 When legendary ad man George Lois speaks, it is no small thing. His performance is a one-man-show offering us a guided tour through the golden age of popular culture. Hailed as the Golden Greek when he first came on the scene, over the years he’s been honored with Lifetime Achievement Awards from the American Institute of Graphic Arts (AIGA) and the Society of Publication Designers (SPD),...