A Music Program Geared to the Stressed 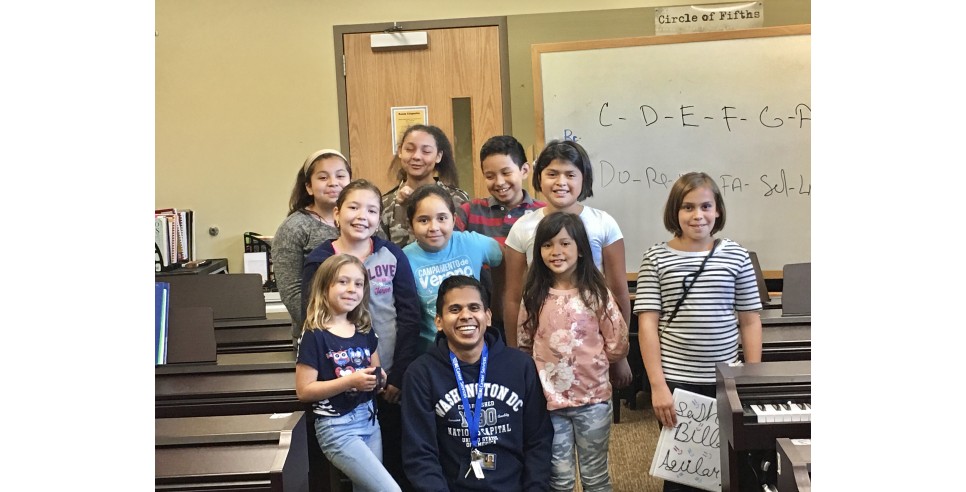 Erick Ocampo Machado is the founder of Music With Vision, a program in Steamboat Springs, Colorado that helps any stressed school youngsters and young adults transfer their emotional anxieties to music. Erick’s idea that music can help the stressed all began in Nicaragua, where he was born during the famous contra war with the Sandinista-led government.  Erick explains that the public school in Nicaragua tapped into his passion for music. His first instrument was the guitar, then at age eleven it was piano. While in school in Nicaragua he noted that many of the students stressed about the contra war were taking drugs. He also observed that those taking drugs who played music sometimes were able to transfer their addictions’ dictates to music or at least talk about their worries.

Erick and his family eventually emigrated to Miami where, while attending Miami Community College, he met his wife. She had worked previously in Steamboat, and thus after they were married they moved to Steamboat. Erick worked in numerous hotels.  In his free time he did what he loved and knew best: organizing music groups in churches for youngsters who also loved music and needed an outlet for their stress. When Erick got his present job at Steamboat Springs’ Northwest Colorado Health as a Community Connector, he convinced one of the community coalitions to start the group Music With Vision and to procure a grant to pay for the three instruments they use, piano, drums and guitar. Ken Davis, Executive Director of the partnership, says,  “Music With Vision encourages opportunities for residents  ages 13 to 25 to connect through quality music activities. We realize that all young adults are at risk. Even if a young adult doesn’t take drugs, he/she will know someone who does.”

Music With Vision has evolved into two age groups. Those 18 to 25 years get together through Jam Sesh, and commonly meet at the local Colorado Mountain College. The younger faction meets in the local churches. Youngsters usually hear about the group in the community or are encouraged by their teachers and counselors to join. Ken emphasizes, “We are not doing  music therapy. We play and connect with music, because music is a universal language for connections, and it does things to our body and brain that is very beneficial. Most teens and young adults don’t want to see a counselor. They tend to say, ‘I don’t want to be mental.’ However, when a youngster opens up, we are here to listen.”

Erick amplifies, “Most youngsters who start playing with us are very closed-mouth. But eventually they start to trust and talk to us. As a community connector I know where to send them for the proper support.”

Music With Vision has a “Yes we can” attitude. They are looking forward to performing at sundry community organizations – the local hospital, retirement communities, halfway houses and wherever else they are invited.

Edith Lynn Beer is a seasoned journalist who covers news in Colorado, Montana and Wyoming.