Libraries We Love: The Breakers 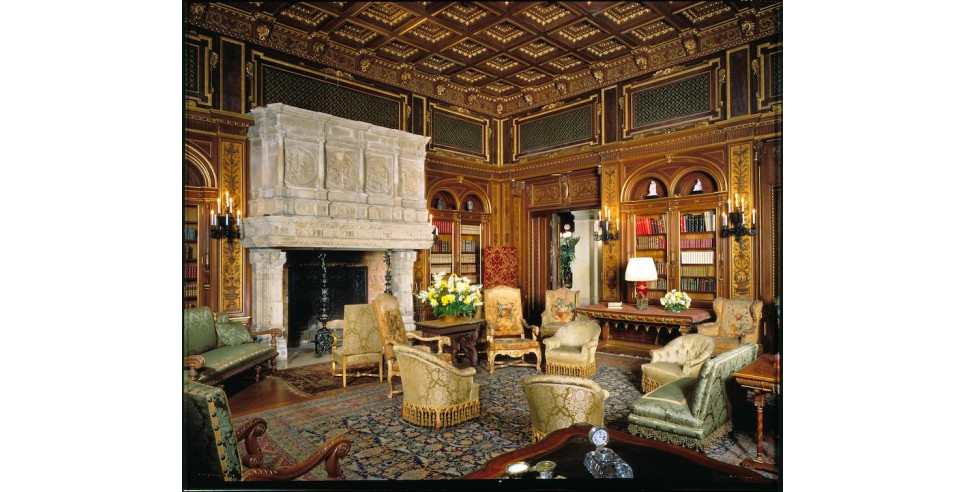 A seaside cottage would hardly be the first place most people would think of when asked where one might find what is arguably the most opulent library in America.

But if that “cottage” were built during the height of the Gilded Age by one of America’s 19th Century titans of industry, then it should come as less of a surprise. For the ultra-rich in the late 1800s, it was a time when one-upmanship ran rampant, no expense was spared, and the phrase conspicuous consumption was coined.

The Breakers, summer home of railroad magnate Cornelius Vanderbilt II, was the most monumental expression of all of the lavish retreats built during that era along the picturesque coastline of Newport, Rhode Island. After his first home on the property, a wooden structure, was demolished by fire in 1892, Vanderbilt invested millions of dollars in building this ornately appointed, 70-room replacement. Preferred building materials included a steel skeleton, Indiana limestone for the exterior, and exotic marbles and woods for the interior. No wall was left ungilt with gold leaf, no ceiling was left un-coffered, and no pediments nor staircases nor mosaic floors escaped being embellished with cherubs or sea creatures or acorn clusters.

There were rooms for practically every occasion: bedrooms and bathrooms galore for Vanderbilt’s large family and for guests, a breakfast room – which was not to be confused with the morning room across the great hall, a dining room, a room for playing billiards, another grand space for performing music and holding gala balls, and – of special importance – a library.

That’s because this empire-builder and his wife were avowed bookworms.

Dominating one wall of the library was a massive 16th century limestone fireplace that originally had been housed in a French chateau. This mantelpiece was one of 27 functional fireplaces installed throughout the building although, since the home was used by the family for only a few weeks every summer, the fireplaces were installed more for show than anything else.

The library became a favorite retreat in the house. It was furnished with more than a dozen richly upholstered chairs which could be configured in various seating arrangements. There were desks for studying, tables for serving afternoon tea, and a special nook designed to accommodate tables where people could gather for cards or board games.

And then there were the books! Enclosed behind glass doors in seven large bays, the bookshelves gleamed with the gilt book spines of leatherbound volumes. The Vanderbilts’ original collection demonstrated a preference for Anglocentric literature: there were books by Jane Austen, George Eliot, Rudyard Kipling, Samuel Pepys, John Ruskin, Anthony Trollope, Lord Byron, Alfred Lord Tennyson and, of course, William Shakespeare. There were also volumes on design, famous women, and American men of letters, as well as folios of photographs and atlases of foreign lands. There was even a selection of works in French.

But the Vanderbilts weren’t snobbish about reading.... Stay tuned for Part Two!!