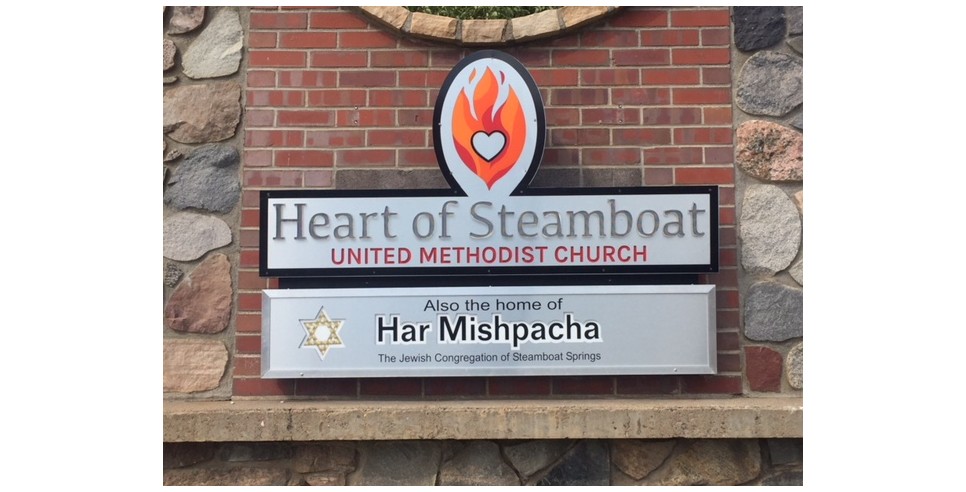 But physically, to hold their services and provide their children with religious education, Har Mishpacha did wander from Mormon Church, to the public library, to condominium club houses, to conference rooms, to hotel facilities, to private homes, any place that would donate or rent space reasonably. As they grew from 10 families to 60 families their needs for larger space grew.

The United Methodist Church, located in the gist of  Steamboat Springs, likes to be known as The Heart of Steamboat Methodist Church - Open Hearts, Open Minds, and Open Doors.  These are not mere words. In 2016 when the church was planning its new addition,  they invited Har Mishpacha to share the space. Joella West, who is the president of Har Mishpacha emphasized, “They offered us a long term home where all our services, education, and events could be held, on a very generous basis.”

Joella explained, “What really gave us a sense of acceptance was when the church put up its signage, Heart of Steamboat United Methodist Church,  they designed the space so that we were able do include our signage, Also the home of Har Mishpacha,  The Jewish Congregation of Steamboat Springs.”

Reverend Tim Selby and his congregation feels, “If we can help each other we would all be better off, and that includes having friendships across faith line.”

Joella points out that members of Har Mishpacha join church volunteers to help with their weekly Open Table Dinners, and church members have helped with Har Mishpacha’s Community Passover Seder. Each faith is learning more about the other. She described an ecumenical service the church and Jewish congregation organized. “Rabbi Mark, Har Mishpacha’s visiting Rabbi, and Reverend Tim planned the service together, Reverend Tim even made a point of asking if the Jewish participants would be comfortable with the music the church planned to use. They are very caring.”