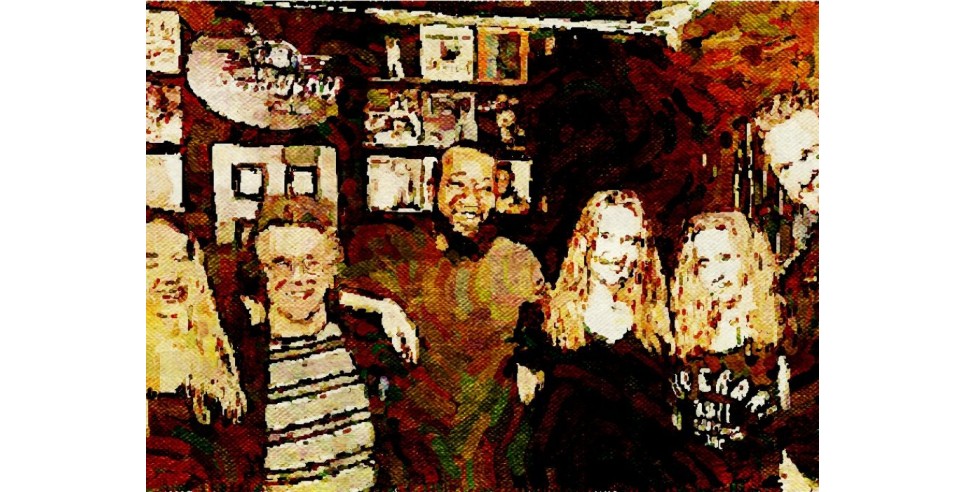 I dropped by Stand Up Labs to catch Sherrod Small’s Race Wars podcast and got to hang with motivational comedian Jenn Lederer, comic Rebecca Rush, Keren Margolis and a very cool dude named Garren James, a former model who runs a male escort agency called Cowboys 4 Angels. He is the CEO, producer and star of the company that is featured on Showtime’s hit show “Gigolos” which is entering it’s 7th season. He describes it as “straight male escorts who provide compassionate and handsome men to women who need companionship.” And after appearing on Tyra Banks’ TV show his company really took off and he has branches in several states. He himself is from Florida and is very open about his sobriety, which he claims helped him succeed. He recently celebrated ten years, after overcoming a difficult past that included being arrested for drugs and other things.

Keren Margolis is doing a new podcast with Abby Rosenquist called “Book Sluts” which sounds interesting and something I need to check out, and Rebecca Rush who won a Naked Roast Battle at the most recent Skankfest also has a book-themed podcast called Comics Book Club, which she currently does from her apartment in the West Village but may soon be doing with one of the big podcast networks! She describes herself as a “former trophy wife” divorced by 27, and she writes for a recovery website called TheFix.com on which she did a four part series of comedians in recovery. It seems like everyone is in recovery these days and doing great things as a result.

And Jenn Lederer does Mogul Mondays a weekly humorous show on YouTube with business tips for entrepreneurs, and in her guise as a motivational comedian does a show at Stand Up NY called #ShiftYourself which she describes as “a transformative comedic experience.” We had a blast on Race Wars and the time went all too fast. Sherrod told me he’ll be headlining at The Village Underground doing an hour and will have Jared Freid as his host and featuring Rosebud Baker. That should be a cool show and is, of course, a big Small World Production!

Afterwards, down at the bar of Stand Up I ran into Monroe Martin who is doing his one man show at Allie Demopoulos’ Misfit Hive out in Queens. It’s called “That’s Not The Funny Part” and is all about his growing up in foster care and how it affects his relationships both romantically and platonically. And then he does his “No Need for Apologies” podcast with his homie and fellow Six Foot Nothin’ crew member, Derek Gaines.

West Side Comedy Club was packed for the joint birthday show of Corinne Fisher and John Campanelli and I was so glad I got to see it because I’ve always known that Corinne is great but I never got to see John do a long set and he’s so creative and funny. He’s in periodically from L.A. where he produces two hit shows, a long-standing how called “Live With John Campanelli” that’s been running for 7 years at The Comedy Store and a newer show called “ A Night at The Improv” which he does at where else but The Improv. What’s cool about John is that his comedy has a point of view and a message. He tackled subjects like people judging jokes before they hear the end, and how a certain segment of the population can’t wait to be offended these days, and he taught the audience a lesson while being really funny. His topics were creative like why Italy is gay due to the statues, and a really funny story about a blonde girl, an Indian guy and a family of dwarves at a dinner table and showed that he could tell that story in a way that was respectful but still very funny. I was very impressed and it was so cool that his Mom was there and when I told her how funny her son was she told me she that had seen ME perform at a show and thought that I was very funny too, and how nice was that? (Rhetorical question!) John’s got two specials out, one called “Nervous” and the other with the great title “New Phone, Who Is This?” He’ll be in Boston in early October at Laugh Boston co-headlining with Esther Povitsky, and Corinne will be performing in a new show that I am producing and hosting this coming Monday night, October 1st, at a really beautiful nightclub on East 54th Street in Manhattan called Le Reve, along with Aaron Berg, Dante Nero, Chuck Nice, and Shuli Egar. The place has amazing food (Mediterranean cuisine), Hookah and a great DJ, so it’s gonna be more than just a comedy show, it’s gonna be a party. And anyone who reads this column, (that means YOU!) and mentions The Interrobang can get in with no cover charge! So please come on down and join us. Great laughs, great food and drinks, and lots of fun!

Vic Dibitetto’s show at Gotham was so packed they had to bring out extra tables from the back or wherever they keep extra tables in a club like that. And before the show even started they had people laughing with Vic’s short comedy films they showed on the four TV screens that stretch across the club. One of them instructed the audience of all the things NOT to do if you know a comic personally like calling him for tickets to the show, asking for good seats, screaming out during the show or asking for a shout-out, or telling us to pick on your friend by motioning from your seat and pointing. Of course, he did this in his usual quiet voice that makes Lewis Black look like a mute! Vic is another one of the few comics these days who is so refreshingly un-PC, and tells the audience right up front if you don’t like this joke get the fuck out now! No one leaves. They obviously came there to see him by choice. Most people are smart enough to know the difference between a hater and someone who’s just joking. So when he lovingly tells jokes about his gay son he explains that he did it with his son’s permission.

Rich Aronovich hosted and talk about funny, Rich really killed it warming up the crowd with an extended set in which he showed his ability to imitate accents including Russian, Spanish Israeli, Italian and Arabic. There might have been even more. He’s really likeable and got the crowd going immediately with his unique brand of humor. It always fascinates me how many things there are to joke about and how you can never run out of funny things to say. What a great community to be part of. At the end Vic expresses his gratitude for all the things he’s been able to accomplish in the 35 years since he started out at Pip’s in Sheepshead Bay, Brooklyn. He used to be a garbage man and West 23rd Street was on his route, and now he headlines there and all over, and he said it just shows that the American Dream is still alive. And to think that it was his short video called “ Bread and Milk” that went viral and brought him to the public eye, and that to me is amazing and just shows people to never give up on their dream because you never know what will put you over the top.

Funny tag. Jimmy Cannizzaro, Lisa Lampanelli’s ex-husband does security at Gotham. His new wife Jenna Esposito is a great singer, who closed out the San Gennaro Feast yesterday with three hours of her music. When Vic was finished with the show Jimmy gave him one of her CD’s called “That’s Amore”, that has lots of Italian music, and showed him a text he got from Jim Breuer who wrote “Your wife’s CD was so good it made me want to make sauce”! The next day Jimmy got a text from Vic saying, “That CD may have made Jim Breuer make sauce, but it made me make love to my wife!”

There are very few independent comedy promoters who are also comedians but Ryan Dacalos stands out amongst them. Ryan promotes shows at a bunch of different venues including New York Comedy Club, Black Cat, West Side Comedy Club, The Comic Strip and Stand Up NY. You can walk in anywhere on a weekday night and find a packed room thanks to Ryan’s hard work. He often works with Andrew Lee as his partner. Ryan didn’t start out doing this. It grew out of him promoting his own shows at Greenwich Comedy Club and Broadway Comedy Club where at one point he was producing five shows between the two. It just took off from there. Later in the week I went to check out a new show he’s doing produced by Ray Gootz at a cool space in the Doubletree Hilton Hotel on the West Side and it’s a very big room that kind of felt like a high school cafeteria for some reason, but way cooler, and the room was packed plus they give the comics free food which is always cool too. The room is called “Tranzit” and executive chef Juan Gonzalez came around to make sure that everyone was happy and well fed.

Black Cat was poppin’ on a Friday night and Giulio Gallarotti was hosting. Scotty Levell was there and has some big things coming all of which are secret. I know them but I’m sworn to secrecy and will tell all when I can. But I can congratulate him on his new son Louie Levell who’s 3 weeks old and he swears already has a sense of humor! Eagle Witt was there and told me he’s celebrating four years in comedy, and so far has passed every club except The Cellar. That’s HUGE for only four years. And when Ryan Dacalos closed the Black Cat show with one of the most unusual acts and styles of delivery I’ve ever seen, Giulio whispered to me, “I wonder if he knows he’s like the premiere alternative comic in New York right now!” Sometimes he’s just silent, and other times he’s laughing hysterically like he heard something funny in his head and is deciding whether to share it with the audience or not. He’s amazing, and a really unique guy with a good heart! 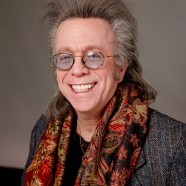