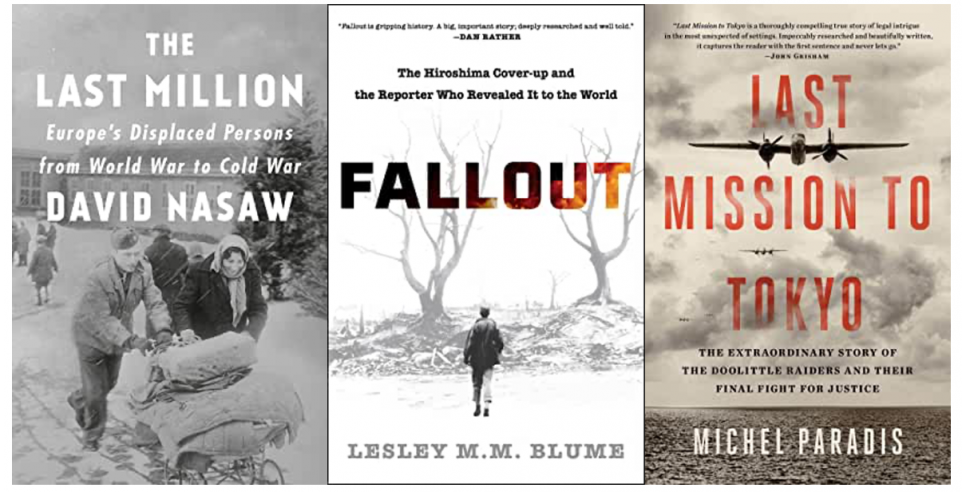 The 75th Commemoration of the End of World War II is Sept. 2, 2020. This fall, three new books cover foreign-policy issues from the conclusion of that war. Those issues are still with us today: how to care for the plight of millions of displaced and desperate immigrants, how to apply international laws to punishing enemies, and how to justify (if we can) the use of nuclear weapons. They’re worth a read this fall.

Michel Paradis’ “Last Mission to Tokyo: The Extraordinary Story of the Doolittle Raiders and Their Final Fight for Justice” (Simon & Schuster $28), wrestles with this question: How does one determine justice in a war?

The U.S. public supported punishing the Japanese for executing three captured American pilots who bombed Tokyo after the attack at Pearl Harbor. To pursue a legal course our prosecutors had a problem — “there was no clear legal theory for charging anyone higher up the chain of command … beyond low-level grunts and functionaries.” The Japanese legal system that approved the pilot’s execution was also flawed since the pilots “had no lawyers, no witnesses, and no opportunity to defend themselves.”

Paradis also notes that the U.S. condemned Japan torturing our prisoners, despite Japan’s national pride in having abolished it. However, in the course of the trial, a Japanese officer volunteered that “higher-ups” had approved of U.S. prisoners being beaten, strung up and electrically shocked.

The reality of not having a universally enforceable legal system to punish war crimes then, as now, shows how such a standard is not easy to achieve in the current war against international terrorists.

Lesley M.M. Blume’s “Fallout: The Hiroshima Cover-Up and the Reporter Who Revealed It to the World” (Simon & Schuster $27) tells how John Hersey, a Pulitzer Prize recipient, noticed that after we dropped a nuclear bomb on Hiroshima, very few survivors were interviewed. The articles published afterward were willingly sanitized by reporters after a little nudging from the U.S. military. Hiroshima’s devastation was televised but the U.S. limited access to the city.

Hersey was not deterred in finding out something more. He personally interviewed civilian survivors and wrote about them as ordinary human beings. Blume explains it was “a then-revolutionary approach to the subject of the atomic bombings” given that the Japanese prodded American entry into the war with the bombing of Pearl Harbor.

Hersey’s 30,000-word essay “Hiroshima” was printed in The New Yorker, with the editors eliminating all other articles. A year had passed from the bombing and the major media outlets believed that Hiroshima was old news. However, it became an overnight sensation, to the horror of the government, which had tried to cover up the resulting civilian human suffering in Japan by limiting physical access and coaxing the press to present a patriotic message.

Hersey’s piece woke the nation to the peril of entering an era of nuclear warfare — one that could be unleashed on U.S. civilians. “Fallout” is particularly relevant now that the U.S. and Russia are moving away from agreements that restrained them from starting a new nuclear arms race. It is a reminder not to ignore the suffering and total destruction a nuclear war can unleash.

At the end of World War II, Germany hosted up to 4 million refugees. David Nasaw’s “The Last Million: Europe’s Displaced Persons from World War to Cold War” (Penguin Press, $35) tells of the last million who had been confined to refugee camps for five years. Most of them were Eastern Europeans who feared going back home. Nasaw explains the politics that drove the U.S. to maintain those camps but to eventually push for the refugees to be settled in Europe, or Palestine for the Jewish refugees.

Like today, countries differed as to whether they would accept refugees. Britain saw refugees as cheap labor but limited the amount of people they would accept. The Soviet Union demanded that all of the former occupants of Eastern Europe return home. However, many had collaborated with the Nazis on some level and feared being jailed or executed. Worse-off were the Polish Jewish population. Although the Polish government welcomed them back, even including some in governing, Nasaw concludes that “years of Nazi occupation had not lessened Polish anti-Semitism” but had “legitimized, hardened and regularized it.”

Wars spin off refugees as collateral damage. Currently, about 1 million Syrians are stuck in refugee camps in neighboring countries. Through great research, Nasaw helps the reader understand the complexity of permanently relocating refugees to a new country. The U.S. led that effort at the end of World War II — could it do it again?