BOOK REVIEW by Patricia Vaccarino: Student Power, Democracy and Revolution in the Sixties 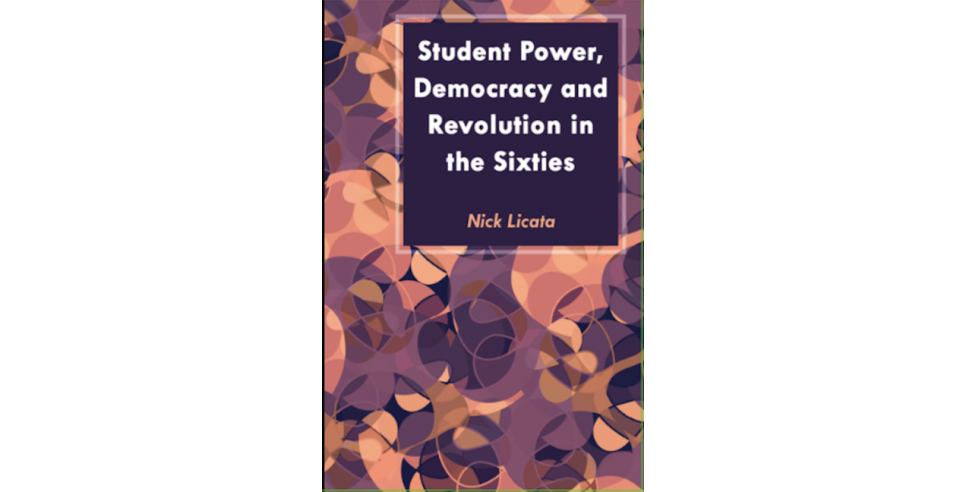 Student Power, Democracy and Revolution in the Sixties

Nick Licata’s latest book is a timely, relevant, and compelling narrative that draws us into the glory days of student activism during the 1960s.These are the halcyon days of citizen empowerment when groups like the Students for a Democratic Society (SDS) flourished, imbuing many thousands of young people with a collective conscience to make a better world. At the very least, their attempt to make a better world became a laudable, good faith effort.

Licata delves into his own personal journey during his time as a student at Bowling Green University. As a kid growing up in a working-class family in Cleveland, Ohio, Licata was inspired by the book Citizen of the Galaxy by Robert A. Heinlein. The book became an imprint—his quest to explore and understand the universe. In a coincidental way, the exploration inherent in Licata’s favorite book Citizen of the Galaxy proves to be a foreshadowing of the pattern unfolding in his own life.

In politics, Nick Licata is never thought of as a front line winner or a sure bet. As a student, the first time he runs for office, he’s trailing way behind, and is the candidate everyone was certain would lose. It was through his work with the SDS that he was called upon to run for president of the student council for Bowling Green University. Then against all odds, he beats all of the popular, cheeky frat boys, winning the election to become student body president. Many years later, when he ran to be a member of the Seattle City Council, once again the odds where hugely stacked against him. But not only did he win, he thrived, serving five terms, eventually becoming the president of the council.

The trajectory of Licata’s accomplishments are not mere strokes of luck. It’s clear how hard he worked throughout his life to form the alliances and support that always pushed him over the finish line. The son of parents who never went beyond high school, Licata is the first to go to college. He wastes no time turning that achievement—the privilege of going to college—into a rudder guiding him to make a difference in the world. His foray into cutting his teeth as an activist takes place while he is a student at Bowling Green University during the mid-to-late 1960s, the heartbreaking and traumatic era of assassination: John, Bobby and Martin. No question, these times were so turbulent, both politically and socially, that some of our leaders lost their lives.

In Licata’s book, social unrest percolated on multiple levels that were often fragmented. Racism, Gay rights, and Women’s rights were social issues that affect different sectors and strata of the society, yet they often coalesced under a unified stand against the war in Vietnam. Antiwar sentiment became an inflection point to address many different forms of social injustice in America. Cleveland might have been a conservative working-class town, but there were rumblings taking place among the young that were intent on changing the status quo. Student activists worked to achieve self-governance and to have a voice in the larger university administration. Until then the needs and interests of the students had been largely ignored by the school’s administration. Licata and his fellow student activists became the voice waking up the tone deaf, and a tour de force that sought to overturn a status quo that, until then, had been grossly unfair and unjust.

For example, it was mandatory for young women to become members in the Association of Women Students (AWS) as an automatic function of enrolling in the university. The AWS functioned as an archaic organization that set dormitory rules to keep young women apart from young men, especially in dorm rooms. Kissing in public brought a steep infraction to young women, but not to young men. While boys could be boys, women were subject to curfews, and also told what they could wear. No short skirts or pants were allowed. As student council president, Licata waged a campaign to do away with arbitrary rules that were best relegated to the past when universities and other institutions traditionally operated in locus parentis and acted as parents (babysitters) to young adults. The authorities, old guard, did not fully embrace that the times were indeed changing. They didn’t see, as Licata states, “[the] Cultural Revolution brewing in their own homes among their on sons and daughters.”

In the new enlightened stew of the Berkeley Free Speech Movement (1964-65) hippies, yippies, black panthers, the little known white panthers, the Black Student Union, the weathermen, and students amid many others, had the right to be in control of their own lives. Young adults had indeed come of age and were quite capable of making their own decisions. As president of the student council, Licata tackled student rights and student activism as two separate disciplines that were indeed joined at the hip. Working within his elected position as student council president and as local chapter president of the SDS, he was determined to lower the voting age to 18. “Old enough to fight, old enough to vote” became a huge rallying cry for young activists who could be sent to the front lines of Vietnam without being of age to vote. It wasn't until July 1, 1971 that the 26th Amendment became law, lowering the voting age to 18.

In his early years as a student activist, Licata burst into Bohemia. Even in relatively conservative Cleveland, he has no trouble finding the coffee house and taverns that serve as incubators for the free exchange of ideas. He’s determined to understand the underpinnings of “participatory democracy.” Ever the explorer, he ventures far beyond Cleveland, hitchhiking on rural roads. Intent on getting to New York City, he finds himself detoured to Washington D.C., but not even a blizzard and total white-out conditions in remote areas of Pennsylvania can stop him from getting to his destination. This fearless persistence also seems to be a driving theme that colors his political life, whether it’s academic or municipal politics. The SDS did not adhere to a “correct ideology,” but worked with any part or group interested in social change. To wit, so did Nick Licata. He didn’t arbitrarily pick sides but reached across the aisle, got things done, and won.

The pervading philosophical sentiment of Dr. Timothy Leary, “Tune in, turn on, drop out,” is a misconception of what was really going on back then. Oh, yeah, there were a lot of stoners. But there were also likeminded people intent on being  open, transformed and informed. Organizations like SDS did some good work. The SDS Stop the Draft Protest in 1967 commanded 100,000 participants—a slice of American Pie—the real thing. And on April 26, 1968, about a million students stayed away from classes for the day—a massive walk out, the largest student strike in U.S. History. The chaos and violence that broke out during the Chicago Convention 1968 when The Whole World is Watching was chanted, and indeed the whole world was watching, could have been predicted with the rise of radicals who were hell bent on staging a revolution.

All of the thinking and reminiscing about the activism of the 1960s brings us to today, when insurrectionists stormed the White House on January 6, 2021 to protest an election they claimed was stolen. The key difference between now and then is there was no shred of evidence that our free election, the cornerstone of our American government, was in any way compromised. If the insurrectionists had good intentions that remains to be seen. Whereas in the 1960s, many young people believed in earnest that thought they could save the world’s future from disaster. Licata’s book shows us the difference between insurrection and righteous activism with a conscience. People of all ages can benefit from learning  how to engage with democracy by becoming active citizens.

Eventually, the SDS imploded, splitting into factions similar to the tension in our current democratic party, which has divided into progressives and moderates. Back in the late 1960s, the SDS had a new, more action-oriented faction that was growing frustrated with fighting against racism, against capitalism, and classicism. The other faction was older, more cautious, reserved and willing to work through the slow process of change.

There is great inspiration watching an individual choosing to be an instrument for social change and staying the course. I’m reminded of the words of Peter Maurin*: “We want to make the kind of society where it’s easier for people to be good.” A good memoir isn’t just the telling of the story of an individual’s life with its trials and tribulations, and joys and triumphs. A good memoir captures the essence of a much larger story— why what happened in the 1960s is still important today. Lessons are learned by traveling with Nick Licata—he was part of a movement that intended to change the community and the country for the better. As human beings, we are at our best when we believe in something much larger than ourselves. Therein lies the real hope for a better world.

Nick Licata is a former Seattle City Council Member, Founding Board Chair of Local Progress & author of Becoming A Citizen Activist. He can be reached at www.becomingacitizenactivist.org