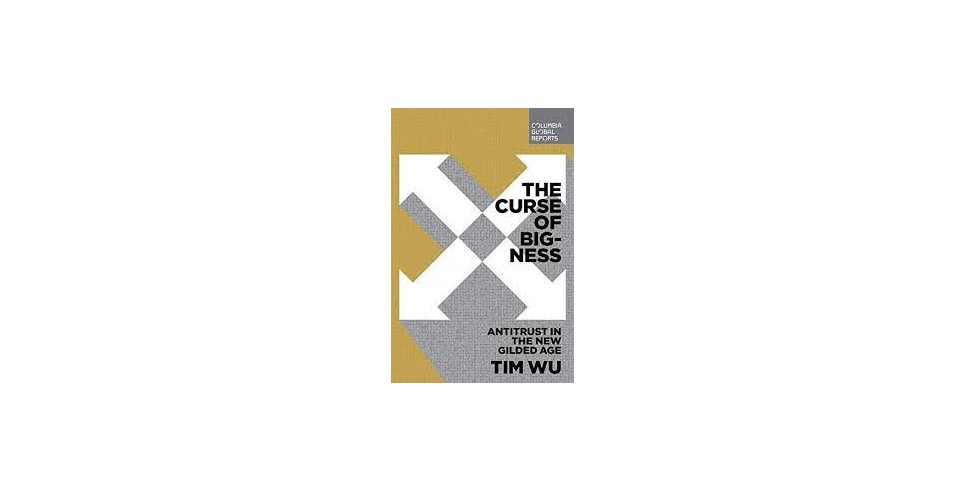 The Curse of Bigness, by Columbia University Law Professor Tim Wu, examines the monopolization movement through the lens of antitrust law, primarily the Sherman Antitrust Act from its inception in 1890 to today. This slim book tackles an enormous and complex problem in succinct narrative that is fluid and technically precise. Short on jargon and big on describing constitutional history in simple terms, you don’t have to be an antitrust lawyer to understand how corporate monopolies are dictating the course of economic policy in America.

There was a time when antitrust laws had teeth. Antitrust laws used to prevent monopolies from dominating our free market economy. Justice Louis Brandeis, who served on the Supreme Court from 1916 to 1939, recognized that concentrated power in any form, whether the power was governmental, institutional or corporate, was dangerous to democracy and a threat to our constitutional design. Louis Brandeis cared about the economic conditions under which life is lived, and the effects of the economy on one’s character and on the nation’s soul.  He fervently believed that institutions should be built to human scale, and that human beings should be able to pursue the right to have a good life, and not merely exist.

Under Brandeis’ leadership on the Supreme Court, the enforcement of antitrust law provided a final check, reining-in absolute private power. Brandeis battled with J.P. Morgan over the New Haven Railroad and was implacable about maintaining ethical standards. President Theodore Roosevelt also took on J.P. Morgan. Roosevelt’s battle with John D. Rockefeller took on legendary, if not epic, proportions. The efforts of both Brandeis and Roosevelt emboldened the Sherman Antitrust Act and gave it teeth.

Later, the Celler–Kefauver Act, known as the Anti-Merger Act of 1950, gave the government the ability to prevent vertical mergers and conglomerate mergers which could limit competition. The thinking was that the practice of competition would be seriously hampered if a particular merger—that was under review—was allowed to happen. Justice William Douglas once said, “Power that controls the economy should be in the hands of elected representatives of the people, not in the hands of an industry oligarchy.”

Since Adam Smith, many economists and lawmakers have favored competition, deeming it to be necessary to create a fair marketplace, and they condemned monopolies. Then along came the Chicago School of Thought led by Aaron Director, who spearheaded the attack against the protections afforded by antitrust laws, asserting that competition produced weaker companies, inefficiency and higher prices passed on to consumers. Aaron Director influenced a number of colleagues, including Robert Bork, who believed in a laissez-faire economy, without regulation,  in which the market worked out its own solutions.

Robert Bork was noted for his failed appointment to the Supreme Court during the Reagan era. During congressional hearings, there was widespread concern that Bork would undermine the economic policy achievements made by the Supreme Court under Chief Justices Earl Warren and Warren Berger. While Bork never made it to the Supreme Court, his influence carried enough weight to facilitate significant changes to antitrust laws. The new line of thinking sought to expunge the notion that monopolies stifled competition and fair play in a free market economy. Instead, antitrust laws sought to set a new standard—the mere standard of consumer harm. The consumer welfare standard became the measure of all things antitrust and posed a test: Is the consumer being harmed by the monopoly?

Beginning with the Reagan administration, antitrust law underwent truly radical change, suddenly becoming tolerant of monopoly misconduct. Harm to the consumer was examined through the lens of price. Did the monopoly charge fair prices to the consumer? The burden was placed on the government to have to prove that a monopoly caused direct harm to a consumer. A monopoly’s ability to dominate an industry by preventing the competition of startups and smaller companies became irrelevant. Few foresaw the danger in allowing monopolies to control entire industries. Former FTC chair Robert Pitzer said, we should always be concerned that “excessive economic pressure will breed anti-democratic political pressures.”

Behemoth companies such as Amazon, Google, Facebook and eBay are not upholding the social contract that knits together the fabric of our democracy. These technology companies are only a few examples. There are many corporate monopolies controlling industries ranging from the airlines to the food industry. These monopolies control pricing as well as regulations that favor their domination in the marketplace. Mr. Wu lays out the danger of continuing to allow large corporations to place a stranglehold over our free market economy.

Lee Loevinger, the former Chief of the FCC, who was Chief of the Justice Department's Antitrust Division once stated, “the problems of distribution of power within society are second only to the questions of survival in the face of threats of nuclear weapons.” The present laissez-faire approach to antitrust law does not create a fair free market economy. Ironically, when antitrust law shifted away from examining monopolies within the context of market competition, and only examined monopolies according to the prices charged to consumers, the inevitable result always favored monopoly powers. Monopolies charge consumers as high a price as they can get. Enormous economic power in the hands of a few has resulted in an abuse of power. Prices keep going up and up, and many Americans are unable to pursue the maxim set forth by Louis Brandeis—to live a good life, and not merely exist.

What we have today is minimal antitrust protection. The last major antitrust case was Microsoft; the last major breakup was the AT&T litigation. It’s been nearly twenty years since monopoly power has experienced major challenge by the U.S. Department of Justice. The existing monopoly structure of many industries: airlines, pharmaceutical, cable, chemical and food, Ticketmaster, the global beer industry, just to name a few, and the tech giants: Google, Facebook, eBay, Amazon, are all deemed to be existing structures that are efficient and require minimal antitrust oversight or intervention. But with that so-called efficiency, there comes tremendous abuse. Monopoly power has indeed stifled competition and the ability for innovative entrepreneurs and small companies to operate in a marketplace that is increasingly being rigged against them.

As for the antitrust precept determining whether consumers are being harmed by the monopoly, in today’s economy there is no doubt that price gouging is being passed on to consumers; this is the very practice that the laissez-faire interpretation of antitrust laws was supposed to guard against. How much longer will the American public have to suffer under the stranglehold of monopoly power? In the final analysis, Mr. Wu suggests that monopoly companies ought to be subject to a formal process of market evaluation and investigation. The outcome would be to break up monopolies that have proven to be substantial and persistent and have been dominant for over ten years. But in order to subject monopoly companies to a market evaluation and investigation, there will need to be strong governmental leadership who can restore antitrust laws the way Justice Louis Brandeis intended—as a measure to protect both the American people and the American free market economy from the tyranny of a few.