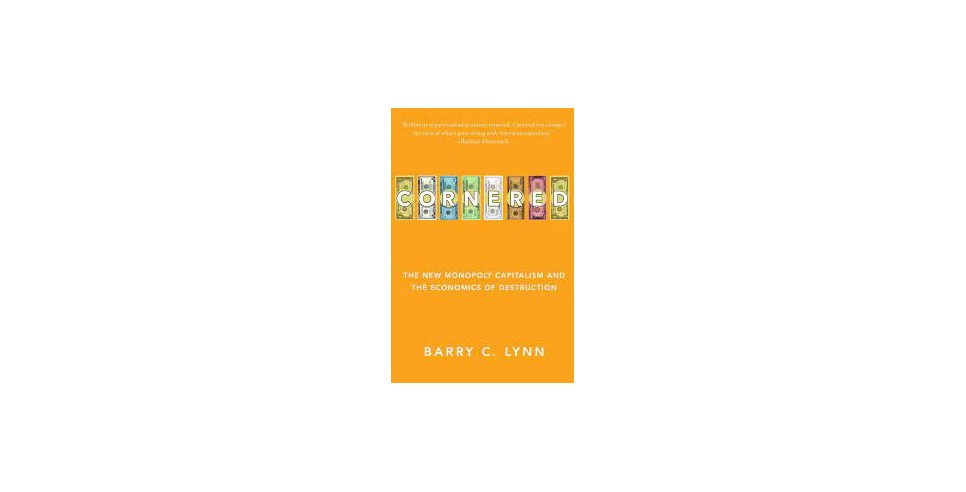 Who can argue with the facts: monopoly companies are constantly finding new ways to charge you for more while giving you less. In his book Cornered, journalist Barry C. Lynn shows how monopoly powers are doing much more than giving you a run for your money. These behemoth powers are actually destroying the free and open market place, which is at very heart of our democracy.

Barry C. Lynn, has been a reporter for the Associated Press and Agence France-Press. He was also a senior fellow at the New America Foundation think tank in Washington, D.C., directing the Open Markets Program. The program was shut down and Mr. Lynn was fired, allegedly for criticizing Google, one of New America Foundation’s chief funders, all of which makes sense. After all, Google is a monopoly power and Mr. Lynn has made a career covering the monopolies who dominate every industry in America.

Lynn points out how the monopolist in the digital world enjoys a power that the monopolist in the physical world does not — this is the power not only to isolate producers from one another and to discriminate among them but also to isolate consumers from one another and to discriminate among them. Although Cornered was published in 2010, its assertions and fact patterns continue to hold weight and are alarming; it’s chilling to observe how much worse things have gotten. The social media monopolies use the information they collect about us to exploit us personally, professionally, financially and politically.

We’ve all been bamboozled and all of this happened right under our nose. Take a look at the consolidation of our department stores—the fun places where we used to like to shop. The holding company Federated controlled Bullock’s, Burdines, the Bon Marche, Bloomingdale’s and Jordan Marsh. In 2005 Federated grabbed the May Department stores that had corralled Lord & Taylor, Marshall Fields, Filene’s, Hecht’s and Wanamaker’s. Most of these stores are gone, gobbled up by a beast that could never be satiated.

Why buy a business just to kill it? As Mr. Lynn points out, “Success in business is less a function of better quality products at lower prices than it is of having good lawyers, friendly legislators and strategic alliances with financiers who will help you buy up, buy off or bankrupt the competition.” One less competitor gives the monopoly that much more power to control an industry.

No industry is exempt from the monstrous appetite of the monopolist. Take commodities — wheat, corn and grain. According to Lynn, “The huge spike in the price of wheat from $3 per bushel to $13 a bushel in the spring of 2008 was not due to a natural or political disaster; it was due to deregulation in the commodities markets in the last two decades that made it easier for speculators to manipulate the prices we pay for our oil, natural gas, cotton, rice, even ship bottoms.”

After giving us a wealth of facts that cannot be disproven and a good dose of the history of Antitrust and Consumer Protection Law, Mr. Lynn also gives us heartbreaking stories that are happening to real people as a direct result of the hidden monopolies that are everywhere.

During the toxic pet food scandal of 2007, rat poison  found in pet food was blamed for the deaths of at least 16 cats and dogs. The pet deaths led to a recall of 60 million cans and pouches of dog and cat food produced by Menu Foods and sold throughout North America under 95 brand names.

There are stories of the many farmers who sell their produce in the downtown City Market in Kansas City Missouri, fighting off the mega chain food producers who try to flood their stalls with commercially grown food, pretending they are independent farmers. These last holdouts to the industrialization of our food supply fret from day to day, wondering if today will be their last day in business.

How did America go from being the land of a free market economy to the land of the monopoly?

During a fireside chat on September 30, 1934, Franklin Roosevelt warned that “men flying the banner of ‘liberty’ would seek to ‘regiment’ the majority of Americans ‘into the service of a privileged few.’”

Predation by the rich and powerful has been going on for a long time, but never before has monopoly power stampeded so wildly out of control, crushing competitors, small businesses and individuals alike in order to stay on top. The gutting of antitrust laws, coupled with the decline of trusted regulatory agencies, has given monopoly powers carte blanche to do whatever they want in the “free market,” a market that is free for them but closed to everyone else.

Editor’s Note: Cornered by Barry C. Lynn is an excellent companion to The Curse of Bigness by Tim Wu.