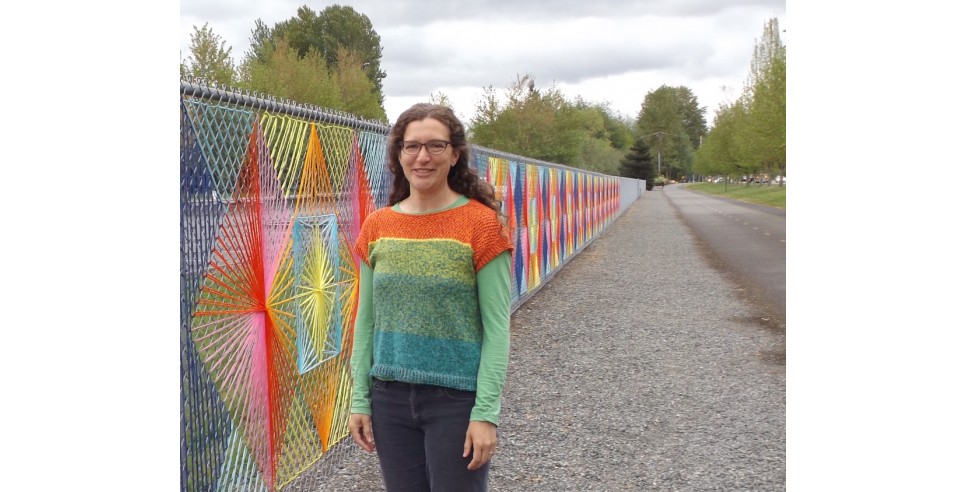 When you hear about public art, it’s usually the monumental kind that attracts attention, like Mount Rushmore or the Statue of Liberty. The backdrops for these works might be bustling cities or magnificent landscapes, but public art, historically, has not found its way into the suburbs. It’s rarely a feature in shopping plazas or residential neighborhoods.

But that’s where Christy Caravaglio comes in. Her quick rise as a yarn bombing superstar is enlivening formerly prosaic properties across suburbia.

Equipped with a quick sense of humor and a ready laugh, Caravaglio has always been entranced by color and pattern. At an early age she learned needlepoint at her grandmother’s knee, quilting from her mom and knitting from an aunt. When it was time for college, she went away to “Art School with a capital A” – but in retrospect, she concedes, perhaps that wasn’t the best choice – “it was all concept and no craft.”

Caravaglio left fiber arts behind for a while, working instead as a graphic artist. When she got married, her husband was in the service so they spent ten years moving from post to post, never really able to settle into a place before the next transfer came along.

Once they started a family of their own, she became a stay-at-home mom and began revisiting some of the needlework skills she’d learned as a child – the initial impetus was the need for a Halloween costume. She found knitting most to her liking because it was portable and easy to pick back up again.

“I really poured myself into knitting,” Caravaglio recalls. “But at some point it became… how many scarves can I inflict on everybody?”

By the time her daughters entered school, her husband was working in the civilian sector, so the family finally had a chance to put down roots. They landed in Kent, Washington, one of a cluster of “suburban cities” located south of Seattle. At last Caravaglio had a chance to connect with her community and, she says, “I wanted to lean into that.”

She volunteered as an art docent in her children’s classrooms, and that gig pulled her deeper into recognizing the need for more widespread access to art. She loved the idea of public art, but it chafed her that this kind of work was concentrated in downtown areas, while outlying neighborhoods were stuck with utilitarian buildings, blank walls and chain link fences.

So Caravaglio became a Kent arts commissioner and arts advocate. She began to think about what she might do personally to get more art out into neighborhoods.

Murals seemed to require too much in the way of permissions and red tape. But the yarn bombing movement was just taking off and, as a knitter, she was intrigued.

“I thought, oh, I can just do this! It totally sidesteps all the permission-makers and it’s so much more immediate and it has no permanent impact. If it all goes wrong you just take it down.”

Caravaglio’s first project was modest. She knitted colorful coverings for the posts flanking a neighborhood fire hydrant. But once installed, the covers attracted the attention of kids who walked past daily on their way to school. It didn’t take long before someone absconded with one of them.

Caravaglio recalls this with amusement: at least there was public engagement!

But for her next project, she was motivated to produce something with more staying power. That’s when she came up with the idea of using a chain link fence as her “canvas.” Gathering up bundles of yarn from her stash, she headed out to a fence that ran alongside a local trail, and set about weaving a bright geometric pattern into the chain link.

“It was a good starting point,” Caravaglio says. “I was out there for quite some time and lots of people stopped and they were all saying nice things.”

With that encouragement, she took another step into the public art world, applying to a call for temporary public artworks issued by a neighboring suburban city.

“And I got it!” Caravaglio says now, with a disbelieving laugh. Her career as a paid public artist was born.

Since then, demand for her work has grown throughout the greater Seattle area. And just last fall, the Washington State Arts Commission named her to its Public Artist Roster, a list of artists pre-qualified to create site-responsive works of art for public schools and state agencies.

Caravaglio has relished the opportunity to be outside, creating her work on chain link fences in unexpected areas, and having folks of all sorts stop by to ask what she’s doing.

“All of these tiny little interactions definitely make a big impact on our psyche, on our mental health and our feelings of connectedness,” she says.

This public art knits community together.