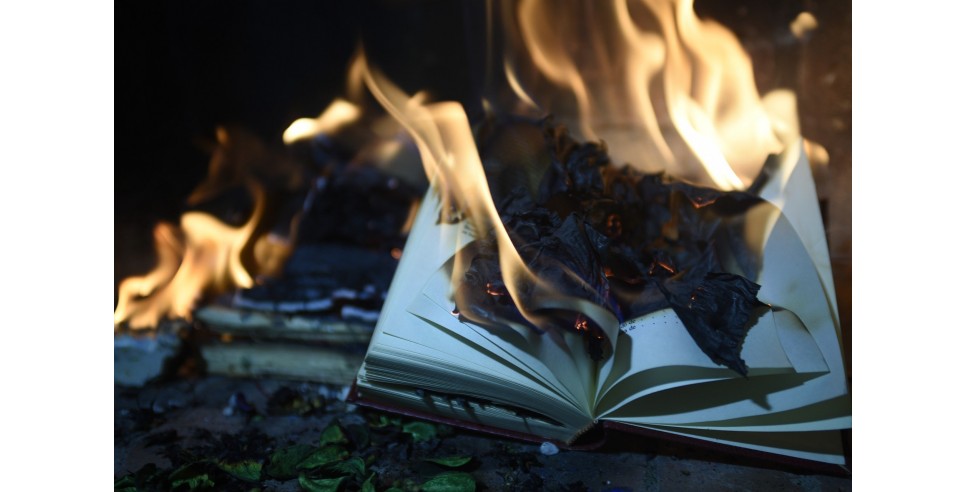 It’s a sure sign that basic civil liberties are turning into piles of ashes when autocratic leaders begin burning books. Beginning on May 10, 1933, Nazi youth groups burned books in public pyres in thirty-four towns across Germany. Hitler’s right arm and Minister of Propaganda Joseph Goebbels delivered a fiery call to action: “No to decadence and moral corruption!” he yelled, while the people who had gathered there made fire oaths promising loyalty to the [State and Hitler] amid a band playing lively marching songs. “Yes to decency and morality in family and state!” Goebbels cried out to the swelling crowd as they tossed books into the fire.

Deemed “un-German,” the books burned by the Nazis included the works of liberal, leftist and Jewish writers. Books by the Mann brothers, both Thomas and Heinrich, found their way into the bonfire along with works by Bertolt Brecht and Karl Marx. The remarkable World War I story All Quiet on the Western Front by Erich Maria Remarque was also reduced to ashes. It was as if World War I had not happened. Aside from burning books, erasure of history is another favored tactic often used by autocratic leaders.

Some of the books burned are rather surprising because they hold so little weight among the “un-German.”  The works of Ernest Hemingway were destroyed. Other writers included on the blacklists were Americans—Theodore Dreiser, Jack London and Helen Keller. Keller’s work stands out from the work of other authors—and its destruction is exceptionally monstrous—because her extraordinary courage and sheer force of will culminated in a remarkable life story. Aside from her accomplishment as the first deaf-blind person to earn a Bachelor of Arts degree, she championed human rights, and dedicated her life to serving the disabled, improving working conditions, and advocating for women’s rights.

The book burnings didn’t end in 1933. Soon books were confiscated from public libraries, bookstores and private collections. The total number of books burned is estimated to be 80,000 or 90,000 volumes. The Nazi book burnings are a powerful symbol of censorship and repression that paved the way for far more heinous crimes against humanity.

Book burnings do not have to be literal or include the visual drama of Nazi pomp and circumstance. In the digital age, there are many subtle ways to destroy information to demonstrate the censorship and repression that is indicative of a loss of civil liberties. The new battleground for mindshare might be taking place in our public libraries. Recent incidents involving public libraries signal the beginning of a dangerous trend.

In Idaho’s Coeur d'Alene Public Library, someone keeps deliberately misplacing books.  Books exploring politics with a progressive point of view, or expressing criticism of the Trump administration are sure to be misfiled far away from inquiring minds—the readers and librarians who want to find them. The targeted books cover a wide range of topics: gun control, women’s rights, LGBTQ issues, and the narratives and biographies of prominent Democrats. The book meddler wrote a note to the library director to boast of his exploits and his intent to hide books in the most obscure places. “Your liberal angst gives me great pleasure,” wrote the book meddler.

It’s not the first time that books with a progressive bent have been tampered with. In the 1980s, the Coeur d'Alene library had endured a number of conflicts with white supremacists who had made Idaho their home. The white supremacists made themselves visible in the community by staging parades, distributing extremist leaflets and holding annual neo-Nazi summits. It is around that time that books about the Holocaust, human rights, slavery and religious histories began disappearing. Someone is doing a fine job of making them very hard to find.

Only in the last week, it came to light that the Library of Congress has experienced politically induced censorship to avoid a negative impact on their bottom line. An exhibit, “Shall Not Be Denied: Women Fight for the Vote,” opened at the Library of Congress in May 2019. Originally the exhibit was supposed to include a photo of the January 2017 Women’s March on Washington D.C. This photo depicted a huge crowd of people holding signs, all bearing messages challenging Trump. Because of the number of people in the march and the negative messages expressed to Trump, the photo was held to be inappropriate and pulled from the exhibit. In its place, a photo with only eight marchers in Houston, Texas, was substituted. The original photo showing the huge crowd that had gathered in protest was removed for fear of raising the ire of the Trump administration.

In another instance, the National Archives doctored a similar huge-crowd-photo of the 2017 Women’s March that was exhibited at the entrance of the Women’s Suffrage Commemorative Exhibit in 2019. In both instances, the leadership of the Library of Congress and the National Archives chose to whitewash history for fear that if they did not, their budgets would be cut by those in power. It was a matter of being between a rock and a hard place. Their mission to preserve the fiscal solvency of their respective organizations took priority over exhibiting a fair and completely accurate portrayal of women’s rights in America.

The self-censorship practiced by libraries and librarians can be so subtle that it is barely noticeable by anyone other than, perhaps, an author. Commonly called soft censorship, a book that is going against the tide of tyrannical thinking, and holds the promise of controversy, can simply disappear. Authors might wonder why their books have been banished from the libraries’ shelves. Authors are never informed why their books have suddenly disappeared. A recent panel, “Not-Quite-Banned: Combating the Invisible Censorship of LGBTQIA+ Stories,” moderated by the ALA’s Office of Intellectual Freedom, included several authors who spoke about having their books among the quietly disappeared. The pattern prevalent among the disappeared books was a decided touch of LGBTQIA leitmotifs in the storytelling.

Political censorship has a peculiar way of turning into a criminal matter. People can go to jail for saying, doing, or thinking things that are considered wrong and out of step with a totalitarian regime. For a tyrant it’s all about control. HB 2044, a bill before the Missouri state House of Representatives, could lead to the imprisonment of librarians if they do not comply with its provisions. The bill seeks to ban “age-inappropriate sexual materials.”  Presumably the “age-inappropriate sexual materials” are supposed to be kept from children, but there is sufficient reason to believe that the bill is intended to completely ban LGBQT content from Missouri’s libraries.

More than simply banning LGBQT content, House Bill 2044, targets events such as "Drag Queen Story Time" that was recently introduced in public libraries. The Drag Queen Story Hour (DQSH) events were first started by San Francisco-based author and activist Michelle Tea to inspire children with a love of reading while teaching deeper human lessons about diversity. House Bill 2044 — the Parental Oversight of Public Libraries Act— aims to add several provisions to the state’s funding law for public libraries. The new provisions establish “parental library review boards” that would evaluate library materials to determine if they constitute “age-inappropriate sexual material.” Any public library that allows minors access to such “age-inappropriate materials” would lose funding. Librarians who do not comply with the act can be fined and imprisoned for up to one year.

Could the Nazi book burnings of 1933 happen in America? Totalitarian regimes often target books as a threat to their ability to maintain control over the masses. What is set forth here isn’t strictly about burning books per se, either literally or metaphorically. Take a look around, libraries have already begun to ban and banish books. And soon there could be jail time for librarians who fail to comply with censorship.

Criminalizing access to books, any book at all, is like crossing the Rubicon, where there is no turning back. Soon it could just as easily become a crime to criticize the administration. Suppressed criticism and condemnation of a president for egregiously immoral and unethical behavior, or for pandering to his own self-interests, and equating his self-interests as the same as the national interest, or what is the best interest for the American people, without censure by congress or the courts, is tyranny. The enemies of this tyranny are women, people of color, immigrants, intellectuals, academics, liberals, Democrats, LGBQT, Muslims, and the disabled.

Let us not forget that Trump jerked his limbs, gyrated and gestured spasmodically before millions of people on national TV to mock a disabled reporter. The reporter, Serge Kovaleski, has a congenital condition, arthrogryposis, that affects his movement. Trump’s actions are as hateful and as nasty as burning a book written by Helen Keller.

What is it about a book that makes it so dangerous that it must be hidden, banned, or burned? Books represent the full range of humanity, opening our minds to new ideas and enlarging our world to explore and encompass other worlds beyond our own. Books elevate us to a higher level of thinking, which gives us the ability to have compassion for people and empathy for the human condition. Books have always been dangerous to any regime that is threatened by genuine democracy. What happened in 1933 can happen again. It is already happening now.

Patricia Vaccarino has written award-winning film scripts, press materials, content, books, essays and articles. She is currently writing a collection of essays NOTES FROM THE WORKING-CLASS. She has written two works of fiction about Yonkers: YONKERS Yonkers! A story of race and redemption and its sequel The Heart of Yonkers (release date April 2020). Book Three in the Yonkers series is in development. In addition, she frequently writes about libraries, and has written a monograph about the circumstances that led to the razing of the Yonkers Carnegie Library in 1982. She has an audience of 40,000+ followers on social media. She divides her time between homes in downtown Seattle and the north coast of Oregon.

Washington Post, November 9, 2019, Citrus County, Fla., leaders don’t like the New York Times. That doesn’t justify keeping it out of their libraries. https://www.washingtonpost.com/opinions/2019/11/09/citrus-county-fla-leaders-dont-like-new-york-times-that-doesnt-justify-keeping-it-out-their-libraries/