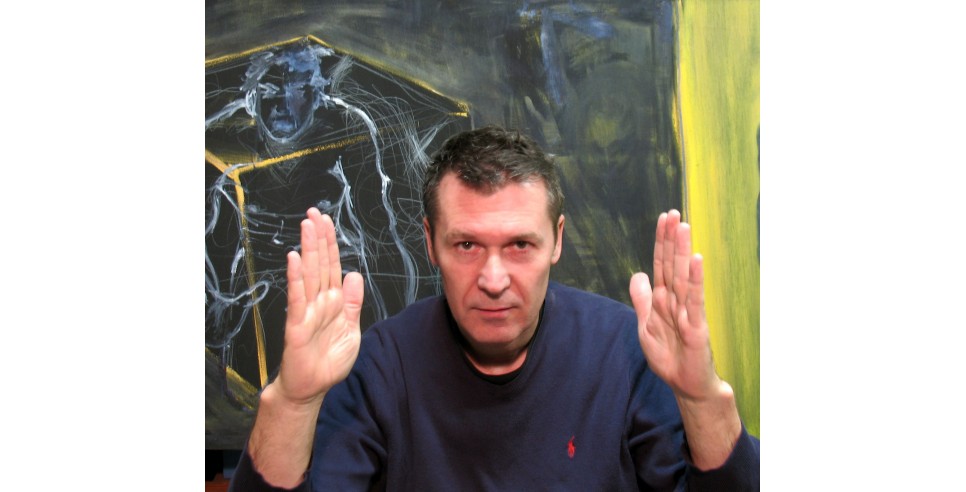 Artist Milan Heger is in love with freedom as much as he is in love with art. Before the Velvet Revolution in Czechoslovakia, he did a two-year stint in a military camp. During the long-bone-chilling winters, only the dream of freedom kept him alive. He found an old abandoned outhouse in the woods and turned this tiny cube into a private art studio. By night in the grueling dark, he used primitive tools to paint on a makeshift canvas. It was here in this cold tight space that he came to know without art, there is no freedom. Art is the only pure human expression that cannot be chained, except for, maybe, love.

No force on earth can stop art or the artist who will pursue his/her/their work, no matter what forces try to stop him. Even authoritarianism that comes in many guises of political power, from communism to fascism, cannot stop art.

Milan Heger was born in Lucenec, Czechoslovakia (now Slovak Republic) during the Cold War, when tensions between the Soviet Union and the United States were at an all time high. Heger remembers being surrounded by art, literature and music in the cocoon of an accomplished family. It was his own grandfather who first taught him to draw. Suddenly his family was forced to flee their home, leaving their possessions behind, as Communism gripped Czechoslovakia, and laid siege to the country’s collective intellect, legal system and all forms of its art and culture.

“Growing up as a child, we had it pretty good when compared to other Communist bloc countries,” says Heger. “Not like Russia or Romania we did have open markets and gardens. We did not have the hardship of being starved to death like Romania.”

He rebelled as a teen, challenging totalitarian ways of thinking and became part of a group of young dissidents. “The whole country was encircled with several layers of barbed wire fence,” he says. “You needed to have a permit to travel outside of the communist countries (out of the eastern bloc).” He remembers a whole world opening up when he found an underground art studio, where he had an amazing mentor who had access to literature from the West: newspapers, magazines, books and music were smuggled into the country. He was exposed to the American and British rock bands, the Beatles, the Bee Gees, Jethro Tull, and Led Zeppelin.

Becoming aware of western popular culture transformed Milan Heger’s life. He says, “My eyes opened to see that an authoritarian force wanted to limit my understanding of the whole world. All of a sudden something boiled over for me and at that moment, freedom became my central fight and the main topic of my art even until today.”

His passion to study art by going to art school was not an option. “I realized that I wanted to study in the free world, and I couldn’t,” he says. Authoritarian regimes always target artists—for they are the most likely to speak the truth and shirk off oppression. There are safety nets, though. Building infrastructure is a pragmatic solution often girded by fierce loyalty to the reigning communists who are remarkably good at understanding the need for buildings but not necessarily for understanding the need for art. Heger had little recourse but to study architecture at Slovak Technical University, where he earned an M.S. in Architecture and Engineering. Within the strict confines of communism, he founded the private design firm, FreeART, that focused on design, interiors, and architecture. Heger recalls, “I wanted to do interesting projects and even when we  won prizes for our architectural recognition, we were not allowed to receive the prize. We could not travel through the Iron Curtain to the West.”

Heger could not suppress his love of art or freedom, both of which had come to mean the same thing. Hiding one’s drive and talent to create art is the equivalent of hiding one’s love under a bushel and the same as denying one’s own freedom. Milan Heger surreptitiously pursued private art lessons with Ernest Fisher in Budapest, keeping his eye fixed on a race he knew he would run, his personal trifecta: Art. Freedom. Love.

Perestroika (“restructuring” in Russian) came along in 1978 to spur growth in the Soviet Union’s economy, but it also relaxed the social, cultural and political stranglehold that had plagued the eastern bloc countries for years. Milan Heger was able to obtain a visa to lecture abroad in an exchange program. “Things were getting a little looser,” he says. “There was an opportunity for me to be a visiting professor in Hawaii. I wanted to see Hawaii. It was the Gauguin in me.” Heger chuckles, noting that he wanted to see paradise, the same way Paul Gauguin had a yen to go to Tahiti.

After his visa expired, Milan Heger and his family returned to Czechoslovakia just in time for the Velvet Revolution. The iron curtain crumbled; the era of the Soviet bloc was over. Throngs of non-violent protests spread across the streets of Prague and Bratislava.  Over forty years of one-party rule in Czechoslovakia came to an end and the government became a parliamentary republic. Even in the midst of the revolution, Milan Heger knew his quest for freedom would bring him back to America. Soon he and his family returned to Hawaii.

In Hawaii his work took on many incarnations in both art and design. While he worked primarily as an architect, galleries exhibited his art and his work generated buzz among private collectors. He also took a deep foray into fashion design, designing a bespoke collection of silk scarves. He became adept at shape-shifting within any design discipline that suited his vision: art, architecture, interiors and furniture. After working primarily as an architect in Hawaii, he moved to the Pacific Northwest in 1997 to open his own architecture and design firm.

Milan Heger brought the full weight of his artistic talent to many disciplines in Seattle: architecture, fashion design, furniture design and interior design. Everything he touches receives accolades. He launched his own line of furniture called Artifacts. His Coffee Table Milan was recently awarded an Honorable Mention by the International Design Awards IDA. With all of the ventures into other disciplines, it is Milan Heger’s art, his passion for creating paintings and mixed media works that dramatically actualize his bold visions of freedom.

If he had his druthers, would he just paint? “Most artists have a day job,” he says. “Then they paint or do art after hours, unless they are lucky to have a patron who supports them. No matter what I do as a day job I do my art just as much. The art is always with me.”

His art is figurative expressionism; he creates symbols embodying thought and emotion, the very essence of what it means to be human. Through the years he has grown and shaped himself into art that blurs beyond the boundaries among race, gender, ethnicity, all of the cultural silos that keep us chained to the past. “There was one change of regime that I was not part of, but my grandmother was part of it,” Heger notes. “When fascism started to rear its head in the 1930s and nations were changing under authoritarian political influence, the generations before us experienced the Second World War with cruel behavior and genocide. Similar situations have been happening recently in the United States.”

Until recently few Americans have witnessed what it means to lose freedom. There is little difference between Milan Heger painting in the equivalent of a garbage can and small children being herded into metal cages at the Mexican border. The loss of freedom is one and the same.

All of Milan Heger’s design mediums can be placed on an important creative tableau. Financially and creatively, they feed his dreams to make art. Heger instinctively knows how to make something out of nothing. As a boy his grandfather, the one who taught him to paint, told him, “Never throw anything away. You’ll never know when it will come in handy.”But to tell the real story of his life, it is essential to focus only on his art. Returning to the notion of painting in a cold outhouse in the woods, Milan Heger was deeply affected by the fact that that he wasn’t allowed to freely express his ideas in art. He had to create art in secret, to avoid being discovered. He learned art cannot be shackled.

Milan Heger’s works are fresh stories bursting at the seams. The stories in his art are composed as if one were to conduct a symphony full of underlying instruments striking the tones of freedom, sometimes jubilant, sometimes discordant—freedom of expression or the lack of that freedom, and with freedom comes the crescendo of social issues, racial and gender equality, and a filial chorale of what it means for humans to be freed generation after generation. His use of color is connected to the essence and energy of color, and is what people respond to on a deep subliminal level the same way synesthetes see color when they hear music.

Milan Heger speaks seven languages fairly fluently, but his art is his eighth and most satisfying language, the universal language. He says, “Each piece is almost an artifact, laying witness to an event in my understanding of the universe.”

Milan Heger’s works have been exhibited extensively in hundreds of solo and group invitational exhibitions worldwide. His paintings and mixed media works have received many awards and are in public and private collections in the United States, France, Canada, Russia, London and Japan. In Seattle he is represented by Patricia Cameron and Ryan James Fine Arts.