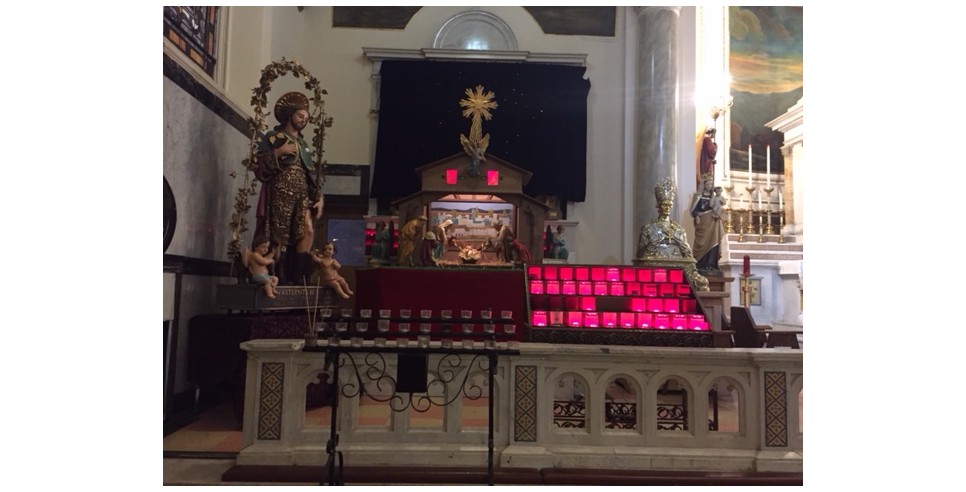 New York City’s Little Italy used to span from Canal and Houston Streets to Lafayette Street and the Bowery. Italian-Americans have long moved on to other parts of the country and Chinatown has taken over the neighborhood. All that remains of Little Italy is the long, snake-shaped city block of Mulberry Street. The neighborhood that once played host to legions of Italian immigrants is a fanciful strip of old red brick tenement buildings, Italian restaurants, outdoor cafés and low-rent souvenir shops. One relic from the past, though, is intact and has stood the test of time. The Church of the Most Precious Blood is the site for the National Shrine of San Gennaro. 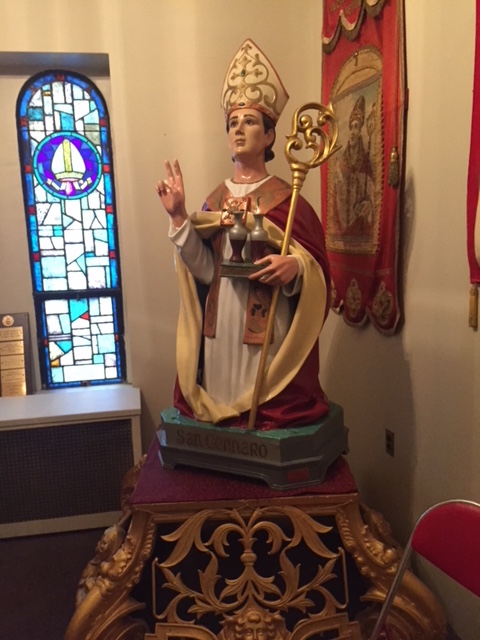 And every September, the exalted statue of San Gennaro is still carried through Mulberry Street during a parade and week-long festival of Italian grandeur, gastronomic delight also known as gluttony, and kitsch.

The humble brick church that houses San Gennaro holds the secret to a past when Italian-Americans so passionately loved the Roman Catholic Church that religious imagery dominated most of Italian art and culture.  The church grounds itself are a red brick tapestry of cobblestones, rectangular treads, some in a straight horizontal line, others paired in L-shapes, or octagons and small squares, all worn smooth and made dull by time. Too many footsteps to count have tread here to visit this holy landmark, where saints, the famous and not-so-famous, ward off misfortune and suffering to make pious intercession with a merciful God.  Paying homage to God means giving enough money, alms and offerings, to the church in the names of dead saints. The trick is to find the saint who can effectively muster the greatest influence with God. So just in case, all of the saints are represented here. Not one has been left out. 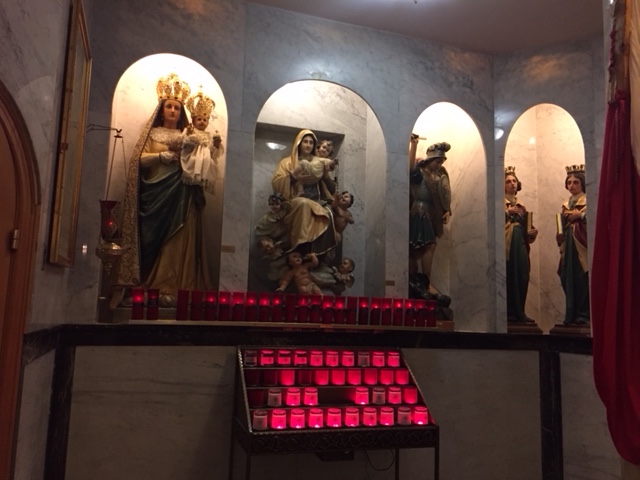 Gold and bronze flank murals, frescoes and sculptures in colors that are muted, bright or bold. Art hovers overhead on ceilings, cradles every wall and nests within every nook. The saints are manifold. Surely, even heathens recognize their names:  Saint Francis of Assisi, Saint Anthony of Padua, Bernadette of Lourdes, Elizabeth Seton, Mother Cabrini, Agnes, Agatha, Santa Lucia, and of course San Gennaro, whose own sacred shrine room is found up a small staircase toward the back of the church. God loves them all, and especially San Gennaro, patron saint of Naples, who emigrated to America in the 1940s. This saint came on the heels of the Neapolitans who fled rule under Italy’s notorious dictator Mussolini and flocked to the U.S.

Paying homage to saints means money changes hands. There is more than one way to make an offering to a saint—you can buy a wall fresco, a brass plaque, or offer fresh-cut flowers at the feet of Mother Mary and baby Jesus, both of whom are adorned with halos. You can also light a votive candle at the foot of your preferred saint.  Real candles burn in jewel tone red and yellow glass. Behind the altar, three panels of murals are hung, depicting Jesus as a young lad teaching the rabbis, Jesus surrounded by money lenders in the temple, and his crucifixion surrounded by a dark, threatening sky.  Outside the raised garden beds are grottos to Francis of Assisi and Mary, mother of God, being graced by cherubs or cast deep in prayer with a serpent lying at her feet. A living, ever-changing mural is a tribute to Italian-American soldiers who died in combat. From World War I to Korea, Vietnam, Iraq and Afghanistan, fresh names are added to the list.

Then, not at all connected to the church of San Gennaro, on the wall of an adjacent building, the mural of Tristan Eaton beams extraordinary color that is neither pious or gold, but passionate enough, and designed from spray paint.  Tristan Eaton is a young artist from L.A. who is growing more famous by the day for his public art—urban landscapes on billboards and on the sides of buildings, dumpsters and doorways. Many of his images are abstract, Day-Glo bits and flecks of Technicolor people who hail familiar from popular culture.  Signaling the entry to the Little Italy of the Twenty-first Century, one of Tristan Eaton’s murals, Audrey of Mulberry, is on the wall next to the legendary Caffe Roma.

Tristan Eaton’s public art is borne of his own person, and meant to connect with the community. People are iconic unto themselves, he seems to be saying, and I am an individual artist who has the power to connect with you. This artist is very much the individual, a byproduct of himself, and not the collective cultural force of the many artists, largely anonymous or unknown, who created murals, frescoes and sculptures of saints currying the favors of a merciful God.  In the San Gennaro Church murals, Christ is walking amid the people to show he is forever one with the people, and the people are forever one with him. Whether we worship something greater than ourselves or whether we only worship our own individual selves, who can say what has been lost and what has been gained. Why do you need a saint to intercede with God, when you have a phone and can text his name directly? In the end, it’s all about what we choose to worship, ourselves, or something greater.