Marilyn Fezza Gives Girls a Voice of Their Own 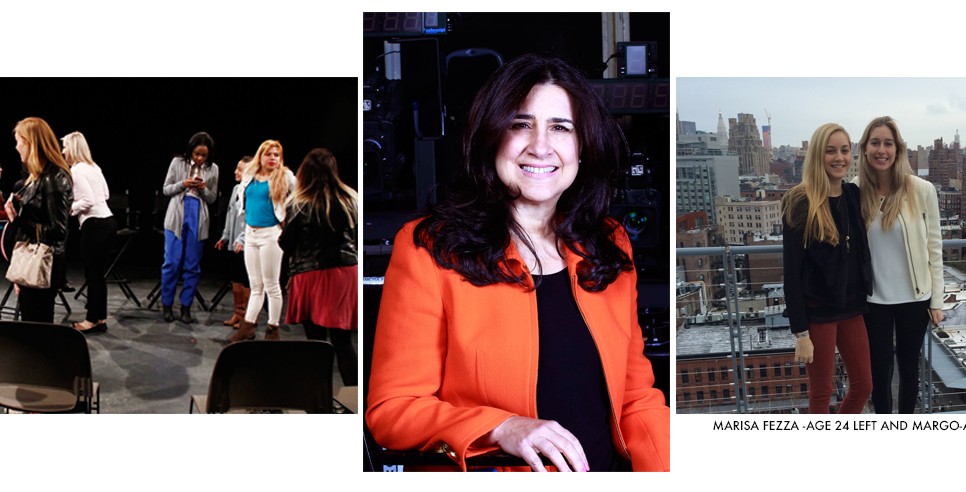 Marilyn Fezza is New York City-based entrepreneur, business owner, fashion designer, mother and feminist who envisions the time when her latest media venture, 7Sisters project, will be embraced by young women and girls worldwide. Marilyn was only 23 years old, when together with her husband, she co-founded a successful apparel label, Andrew Fezza. She served as COO, Women’s Design Director, Head of Marketing and PR. She also oversaw Production, and was the Creative Director managing the brand, advertising and special events, including runway shows.

“I’ve always been an entrepreneur,” she said. “I get a thrill by having a vision and making it happen.”

Being an entrepreneur comes easily to her. She is a first generation American whose parents emigrated from the Middle East to the USA. Even though Marilyn’s father was an immigrant who spoke no English, he started and successfully grew an importing business. While being entrepreneurial is second nature, Marilyn has been equally governed by her strong determination to make the world a better place for women.  She was profoundly influenced by her mother who, as a giver and a caretaker, left a lasting imprint of social awareness, social justice and the desire to create a better world, especially for young women.

Marilyn’s mother, originally from Lebanon, grew up in a close-knit family of 10 children, seven of whom were sisters. Only two sisters remain in Lebanon and the rest have settled around the world. Marilyn learned from an early age that when women come together and talk about the “little” things in life that are important to them, they develop confidence, strength and self-determination from those conversations. Marilyn’s seven aunts who engaged in conversation, no matter where they were located in the world, became a powerful imprint for the concept that would later emerge as 7Sisters project.

In 1994, while Marilyn was on maternity leave with her third child, she started an after-school enrichment program called Awesome Children’s Enrichment (ACE). She saw that schools lacked creative methods of teaching and she wanted to implement exciting ways for kids to learn. Marilyn became interested in applying a gifted education approach to learning to all children, not only those who qualified through high scores on tests. With the support of her local school superintendent and a handful of parents, she founded ACE as an after-school program that debunks the one-size-fits-all approach to education and instills a love of learning that is fun and creative. Today, ACE lives on in her local public school and in the past 22 years has served thousands of children.

Marilyn began to notice how her childrens’ friends, particularly girls in high school and in college, were suffering from stress, peer pressure, depression, body image and lack of self- esteem. Many numbed themselves to the pressures to fit in by self-destructive behaviors. The rites of passage for girls transitioning into womanhood were so annihilating to their sense of self- worth that it caused many young women to lose their authentic selves.

Marilyn’s daughter Marisa took a Broadcast Journalism class in high school, where she made a short film about girls being dumbed down in pop culture. This film became the seminal concept behind launching 7Sisters project as a global media platform. 7Sisters uses every facet of the media from blogging and videos to live conversations in a talk show format to get girls and young women talking to one another. 7Sisters removes the boundaries of ethnicity, color, religion and economics.  Girls come together to talk about the things in life that are really important to them. Through this open, honest dialogue they learn how we are all connected at the core of our humanity and they are able to reclaim their authentic selves. For more information, please see www.the7sisters.com.