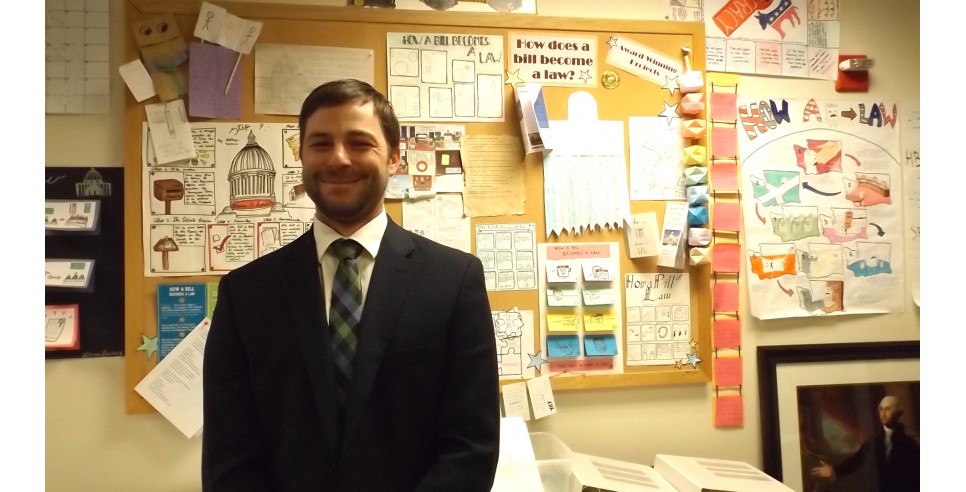 Politics has always been contentious, but the discord that predominates at so many levels of government these days seems to be eating away at the heart of some of our longstanding institutions.

Leo O’Leary has no patience for that. And although he isn’t an elected official, he’s still in a pretty influential position to do something about it. O’Leary holds the unique position of Page School Teacher for the Washington State Legislature.

About three-quarters of the states across the nation run some type of page program that gives young participants (generally middle school and high school students) on-site exposure to the workings of their state legislatures. But only Washington State includes a robust educational component that aligns with state standards and gives academic credit.

O’Leary, neatly dressed in a dark suit, white shirt and tie, took time during a break between classes recently to talk about what the program entails and what it means for students.

The major part of a page’s day is filled with duties that involve delivering notes and bills to the Senate and House floors, where they get to witness the conversations and deal-making going on among legislators from both sides of the aisle.

“That isn’t something you get out of a book,” says O’Leary, “you have to be here to see and feel and breathe it.”

Additionally, pages might spend time working at different stations around the Capitol campus, from the gift shop and cafeteria, to security.

But during their weeklong stint, they also spend two hours of every day in O’Leary’s brightly decorated classroom, located in the basement of a legislative office building, just steps away from the State Capitol.

The pages participate in this intensive, week-long course in the mechanics of lawmaking and civic involvement to go along with the their hands-on learning.

O’Leary teaches everything from how the three branches of government interact with one another, and how a bill becomes law, to proper etiquette and comportment on the floor of the chamber.

He arranges visits to the State Treasurer’s office and the State Supreme Court, and

scavenger hunts that help the students familiarize themselves with landmarks on the Capitol campus.

Then back in the classroom, he gives the students a choice of different hot-topic issues to research. By the end of the week, they are expected to use that research to draft a bill – then they advocate for it while sitting in mock session in an actual hearing room and using the rules of parliamentary procedure. This is their capstone project, and TVW, the state’s public affairs network, records the proceedings.

As Page School Teacher, O’Leary presides daily over four two-hour classes, each filled with a different coterie of students. And then he does it all over again with a new batch of students every week for the duration of the session. He typically works with as many as 600 students per legislative session.

When the session is over, the legislators go home – but that’s when the next phase of O’Leary’s job kicks in. Over the summer, he teaches K-12 teachers who come from around the state and earn clock hours by participating in a Legislative Scholar Program.

And there’s yet another facet of O’Leary’s work: traveling to school districts throughout the state to spread the word about the Page Program. That includes letting school administrators and prospective pages know about the Gina Grant Bull Memorial Legislative Page Scholarship. This fund uses federal free and reduced lunch standards to determine eligibility. With over 40 percent of Washington’s students qualifying, this scholarship addresses historical inequities in participation by defraying travel and other expenses associated with participating in the weeklong Page Program.

Time and again, O’Leary sees that the Page Program helps “get kids out of their bubbles.” Whether they’re from urban areas or rural communities, whether they’ve grown up with privilege or come from economically disadvantaged backgrounds, they all have to wear the same uniform when they serve as pages in Olympia, and they mix it up and learn from one another.

“They bond around the common theme of ‘Hey, we’re here to work,’” O’Leary says. “And they make connections that can last a lifetime. This place gets in your blood.”