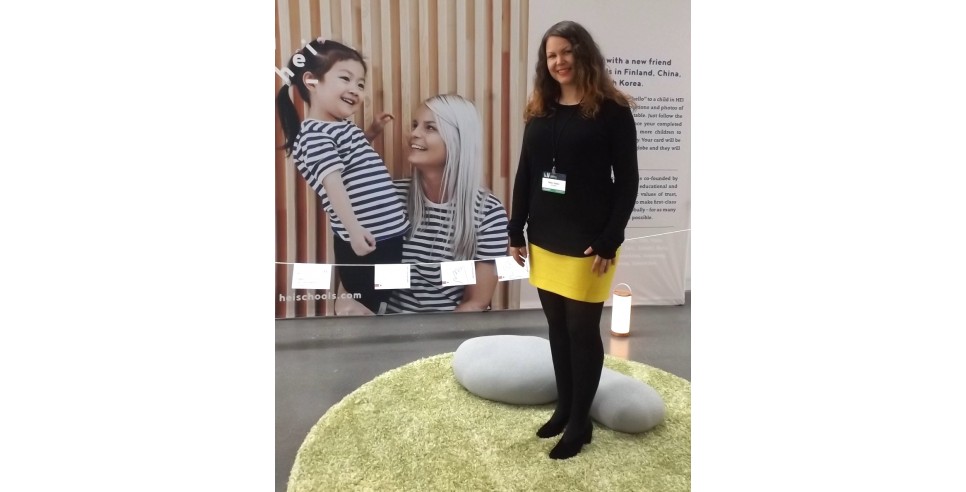 Forbes Magazine once declared that “to be a startup is to claim a freshness that suggests a finger on the pulse of the future.” At the Second Nordic Innovation Summit, held recently at the National Nordic Museum in Seattle, there was a convergence of startups from blue tech (maritime), green/clean tech, financial innovation and smart cities.

But there was one presenter that made perhaps the most convincing argument of all for its standing as a startup. Helsinki International Schools (HEI Schools) is a new enterprise that is licensing its Finnish early education model to schools around the globe.

After all, if we’re talking about gauging the pulse of the future, isn’t the ultimate startup the education of our children?

Milla Kokko is CEO and co-founder of HEI Schools.

“Hey!” she says with a ready smile and a big wave upon first meeting. “That’s how you pronounce our name.”

Kokko is outgoing and easy to chat with, but engage with her for a few moments and you will quickly understand her passion for her work.

“We’re bringing up children who will change the world,” she asserts.

Over the last decade, Finland has been rated one of the happiest nations in the world, and for the last two years in a row it has been number one on that list, according to the United Nations’ World Happiness Report. At the same time, Finnish schoolchildren are consistently posting top scores in international education rankings. The two findings are not unrelated.

With results like that, and looking around at other places in the world that are less successful, the Finnish impulse was to share.

HEI Schools turned to the University of Helsinki, which became a partner and shareholder in this endeavor. The University had already invested years of intensive research into the values and best practices for early childhood education.

“We’re standing on the shoulders of giants,” Kokko says.

The University’s findings showed that in high-quality early childhood education, competition should be minimized. Instead, young children are encouraged to explore ideas and discover solutions through play, becoming active agents in their own learning. The emphasis is on holistic development of each individual child. This pedagogical approach has been rigorously tested in preschools all over Finland.

Wanting to replicate that success elsewhere, HEI Schools carefully created a curriculum, learning materials, and a teacher training course. As Kokko and her education partners moved forward, “our innovation was how to make that model available outside of Finland.”

For decades, Finnish brands (Fiskars, Marimekko, Nokia) have been admired and adopted internationally. Finland knows how to package concepts.

Those design skills naturally came into play once again in creating HEI Schools’ classroom environs. The use of wood and natural light in HEI’s learning spaces has that signature Nordic look – calm and unencumbered. In addition to the pedagogy, Kokko says, “the sense of beauty and harmony has a very large effect” on a child’s learning environment.

“This really struck us,” Kokko recalls. “Bright colors and cartoon characters make it impossible to focus. We should provide children a [clean] canvas so their own artwork can be hung beautifully.”

The first HEI Schools opened in 2017. Currently there are seven schools in operation: two in China, three in South Korea, one in Australia and one in Helsinki.  By the 2020-2021 school year, there will be more than a dozen HEI Schools up and running, in places including Argentina, Indonesia, Kuwait and Saudi Arabia.

In this global expansion, HEI Schools is mindful about navigating cultural trust. This goes to all levels, Kokko says: there’s the relationship between the Finnish startup and their local partners, the relationship between school management and teachers, and also between teachers and parents. HEI Schools has discovered that it needs to educate all three of these cohorts – management, teachers, and parents – before they can ever educate the children.

But Kokko says that led them to a realization as they started working with such different communities across the globe and incorporating new cultural perspectives.

“We’re not building Finnish culture, we’re building HEI culture. Creating a strong base for learning is what really counts.”