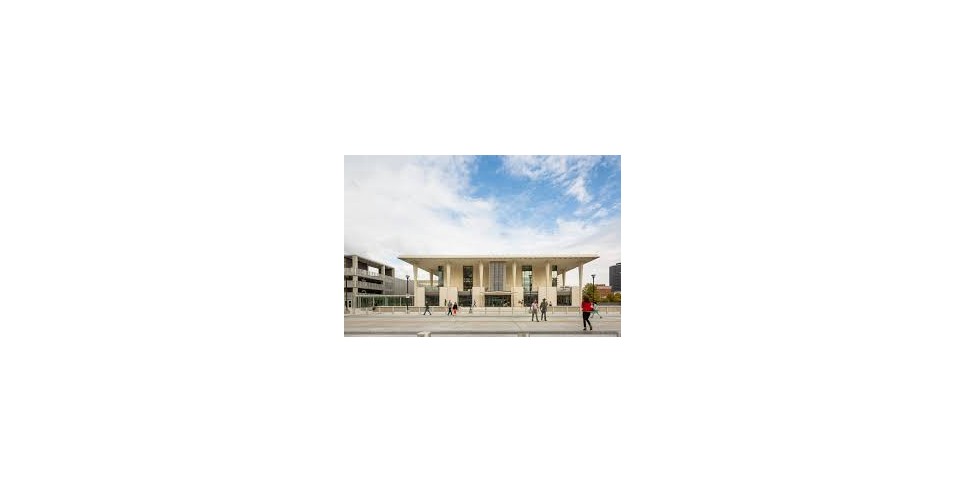 When I was twenty-one, I traveled across the country and found Oklahoma unlike any other terrain I had seen on the east coast. Dry roads kicked up plenty of dust. I found myself at a gas station that did double-duty as a liquor store. I thought I was in the middle of nowhere, but I was in Stroud, Oklahoma, between Oklahoma City and Tulsa. Situated on the Arkansas River, and sitting at the foothills of the Ozark Mountains, Tulsa is the second largest city in Oklahoma and the first place where I ate Mexican food.

I wish I could have visited one of Tulsa’s many libraries. Public library service started in the early 1900s. Tulsa’s very first library was in the basement of a courthouse. I like to think it did double-duty as shelter during tornado season. Some erstwhile librarian will have to do the fact-checking on that assumption. While Andrew Carnegie awarded a grant for $12,500 to build the original library, funds to complete the project came from private sources.

The exterior of Tulsa’s first library building was faced with Bedford Limestone quarried from Indiana. Its interior stairways and pillars were constructed from marble. Despite its original glory, within ten years the library was running out of space. By 1970, the original building was described in Tulsa’s newspapers as an “ugly old lady.” The building was soon knocked flat to pave the way for a parking lot. A new central library opened in 1965. Deemed to be of space-age design, the library’s exterior lights were turned on remotely via a U.S. communications satellite. That building underwent a massive $55-million renovation, reopening to the public in 2016, to become a Library serving the needs of its community in the Twenty-first Century.

The present incarnation of the Tulsa Library system is much more than a single Central Library building. Today’s Tulsa City-County Library actually emerged during the 1960s, but this library system has grown to encompass twenty-five branches. Among its many civic activities, The Tulsa City-County Library bestows multiple prestigious literary awards to authors, including the Peggy V. Helmerich Distinguished Author Award, the Anne V. Zarrow Award for Young Readers' Literature, the American Indian Festival of Words Writers Award, the American Indian Circle of Honor Award, and the Sankofa Freedom Award. Sankofa, derived from the Akan language spoken in southern Ghana, literally translates as We must go back and reclaim our past so we can move forward; so we understand why and how we came to be who we are today.

The Tulsa City-County Library strives to promote lifelong learning, literacy in all forms and critical thinking skills.  During this past Banned Books Week (September 22—28, 2019), the library celebrated books, reading, freedom of information, and providing access to all. The library’s message to the public is Censorship Leaves Us in the Dark. Keep the Lights On!

It’s no surprise that Tulsa City-County (Okla.) Library was selected to receive the 2019 Library of the Future Award, sponsored by ALA and Information Today. One reason why the library system was selected was due to its solid track record of implementing its creator-focused digital training, and its complementary workspace called the Digital Literacy Lab.  This lab gives people the opportunity to experiment with the many facets of learning the new and emerging technologies related to digital literacy.

The library’s many outstanding programs, ethnic research resources, and forward thinking services enrich life and learning for Oklahomans in the Twenty-first Century. The library also embodies the true meaning of the term Sankofa: We must go back and reclaim our past so we can move forward; so we understand why and how we came to be who we are today.

Community services and hours vary at each branch.