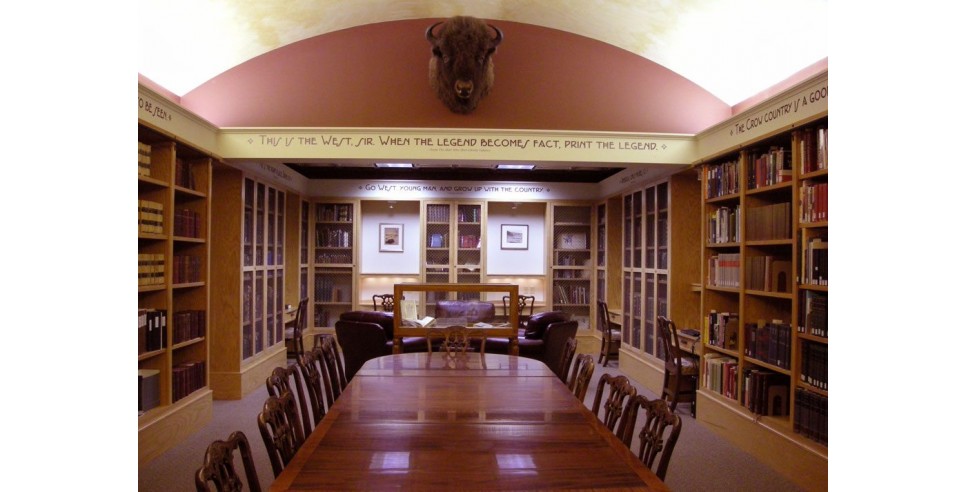 The birth of the McCracken Research library in the Buffalo Bill Center of the West in Cody, Wyoming has a compelling history. Originally in the 1920’s there was the Buffalo Bill Museum housed in a log cabin much like Buffalo Bill’s old cabin, TE Ranch house, on the Southfork of the Shoshone River.  We need to remember that Buffalo Bill, born William Frederick Cody in 1846, became the personification of the American pioneer and the founder of Cody, Wyoming.

As the museum grew, a curator was needed. In 1959, Harold McCracken, an author, hunter, and an explorer, mainly of Alaska, who was living in New York City, was asked to transform a building in Cody donated by Gertrude Vanderbilt-Whitney into the Buffalo Center of the West.  He was consequently honored in 1980 a few years before his death with the McCracken Research library named after him. The library has 30,000 books about the West, as well as personal papers such as the original telegram announcing Custer’s massacre (also known as Custer’s Last Stand), and the first edition of Jack London’s Call of the Wild. This treasure trove attracts authors, academicians, students writing their theses, and local school kids.

The library is known for having the largest non-political collection of rare books on firearms, tomes on the history of Native Indians, and volumes about the old west, nature, and natural history. Included are more than 300 manuscript collections, and over a half-million photographs, and out of view are large vaults which preserve archives and photographs in a controlled climate.

The local school children seem interested in everything, not only the old west stories, but also what life was like before there were laws. The library likes to give the youngsters tours so that they get a sense of the research material available to them.

The center is ready to give information over the phone, but if you are ever in the area, the McCracken library is well worth a visit. Their motto, adopted in 2006, is “The library advances the understanding, appreciation, and study of the American West and plays an integral role in the creation and dissemination of scholarship on the region.”