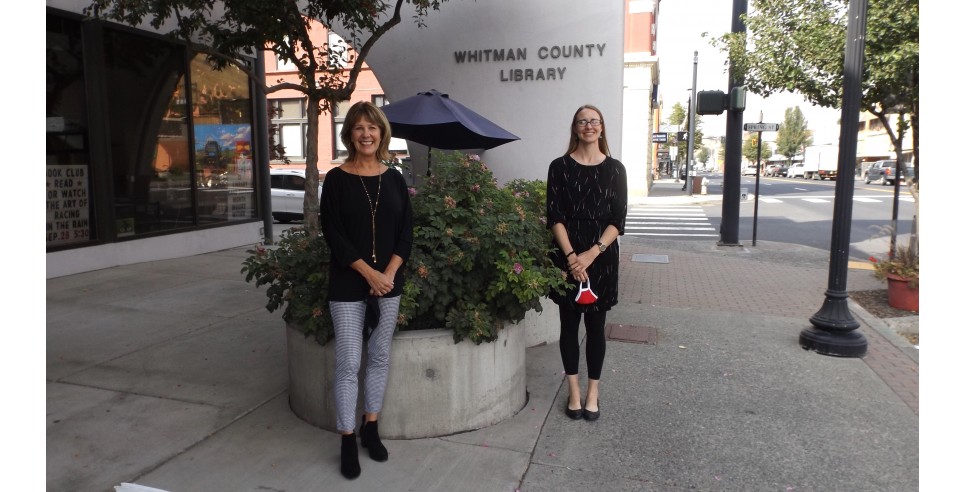 The Palouse is a fabled landscape in eastern Washington State. It features ancient buttes, basalt-lined coulees, and photogenic rolling hills that have been tamed into the nation’s most productive farmland for wheat and legumes.

Situated squarely within the Palouse, Whitman County is home to one college town (Pullman, population 35,000); the county seat (Colfax, population 2,900); and a scattering of don’t-blink-or-you’ll-miss-them hamlets situated at the junction of county roads or tucked into narrow valleys.

These are the kinds of towns that post photo-banners of their half-dozen high school graduates alongside the American flags on the lampposts down Main Street. But as big-hearted as the community pride may be, many of these rural towns are shrinking. Empty storefronts tell the tale. The gas station is boarded up. There’s no longer a grocery store or a pharmacy, a doctor’s office or an insurance agency.

But one constant remains in these little towns: the public library.

For the last several years, the Whitman County Rural Library District (WCL), based in Colfax, has run 13 other branch libraries throughout the 2200 square mile county – in Albion, Colton, Endicott, Farmington, Garfield, LaCrosse, Malden, Oakesdale, Palouse, Rosalia, St. John, Tekoa and Uniontown – towns that are home to fewer than 500 people on average.

Under the leadership of director Kristie Kirkpatrick, who has been with WCL for 33 years, the library system has been committed to providing service to these small towns. And in turn, the townsfolk in each of those communities have steadfastly continued to pony up the funding to keep their branch libraries in operation.

Kirkpatrick sat down recently to talk about her work. “We do just about everything big libraries do – and we reallyknow our patrons,” she said.

Library services include check-out of books and books on tape (which are especially popular during harvest season, when farmers listen to the tapes in the cabs of their combines), story time for kids, book clubs, computer access and tutorials, classes of all kinds, vaccination clinics during flu season and well-attended voter forums during election season.

The past year has been an exceptional one for WCL, in many ways.  At the end of 2019, the library achieved an all-time annual attendance record – over 45,000 – for its programs and classes. That’s in a county library system that officially serves 16,000 patrons. (The City of Pullman has its own stand-alone library system.)

Then earlier this year, WCL marked its 75th anniversary.  But because this milestone happened in the midst of another extraordinary event – the coronavirus pandemic – there was no big celebration. Indeed, all of the library buildings were shut down for a time. Library staff implemented a new system of mailing requested items to patrons’ homes, then pivoted to curbside service, and in August, when the library was allowed to reopen, the staff adjusted yet again, reconfiguring for what are now reduced open hours with social distancing requirements and time limits for library visits.

Also this year, Kirkpatrick – whose smiling presence has been a mainstay not only for the community, but also as an advocate for libraries at the state and local level – announced her impending retirement. Her replacement was hired from the neighboring county library system.

As director of the East Adams Library District, Kylie Fullmer had worked actively to support local and statewide broadband initiatives helping to ensure that rural areas had access to high speed internet. This was certainly one of the factors in her selection as Kirkpatrick’s successor.

WCL, too, has been dedicated to expanding digital inclusiveness. In the late 1990s, the Gates Foundation provided a game-changing grant that provided equipment and infrastructure changes, with a surprise visit by Bill Gates, himself. Now the CARES Act and local funding sources are helping to advance internet access even further.

In the 21st century, this has become imperative for modern democracy. In rural America, it gives remotely located citizens the same tools to access information on current affairs that their urban brethren have, and it facilitates their ability to ask questions and exchange ideas.

But last month, not even 24 hours before Fullmer was scheduled to begin training with Kirkpatrick for her new job with WCL, an almost unthinkable catastrophe befell the community. It was already a hot and wind-whipped day up in the northern reaches of the county when a tree branch fell on a power line, igniting a fire that quickly exploded into a fast-moving inferno. It flashed through tinder-dry fields and stands of parched pine before raging up the road to the little burg of Malden, where it incinerated everything in its path: cars, trucks, homes, the Masonic lodge, post office, city hall, fire station – and the branch library. Only the charred book drop box out front remained recognizable.

Eighty percent of the town was reduced to a pile of smoking ash and rubble. And Malden, Fullmer noted, was one rural community where the internet already had been laid to every door.

Recalling the little library, Kirkpatrick shook her head. “That library was so well loved,” she said. “The Malden school bus driver told us that every week when story time was scheduled at the library, those kids were raring to go.”

The library had been a homey community gathering-place, with lace curtains at the windows and a colorful rug on the floor. It had been stocked with five computers and a rotating selection of 600 books – valued at $20,000 – as well as puzzles and Legos and games.

Since then, Kirkpatrick and Fullmer have teamed up with the Malden library branch manager, whose own home had burned to the ground, to work on disaster relief efforts for their Malden library patrons. They’ve added more computers and more open hours to the branch library in a neighboring town, where Malden kids already attend school. And they’ve been assisting Malden families in filing insurance claims.

At the same time, Kirkpatrick has been working with her successor to bring her up to speed on overall library procedures throughout the library. It’s been difficult, she acknowledged.

“I say, ‘This is how things normally are’ – but it’s been a very different reality this year.”

Fullmer, who at least has the benefit of having known Kirkpatrick as a colleague for years, nodded. “It’s been a complete brain shift,” she said.

And yet, there are some things that never change. In a recent exit interview with a local newspaper, Kirkpatrick was asked how her job had changed over 33 years. Of course there were things like automating the library catalog, digital buildout in rural areas and the implementation of internet access in libraries.

But what hasn’t changed is the library’s fundamental role in safeguarding intellectual freedom.

“This is the fiber of what we do,” Kirkpatrick said. “We are living in a rural, conservative place, but our citizens have always understood that the backbone of democracy is providing information without any bias.”

“Libraries are such a protector of democracy.”

NOTE: Safety measures remain in place to comply with state guidelines, and patrons are reminded to wear a mask and maintain social distancing standards. Browsing and computer time limits have been extended to thirty minutes at all locations to better serve patrons. Curbside service will continue to be available during these hours by request.

Essentials to Keep in Your Emergency Kit

Let’s face it: You can’t predict the future. That’s why having a fully stocked emergency kit is so...