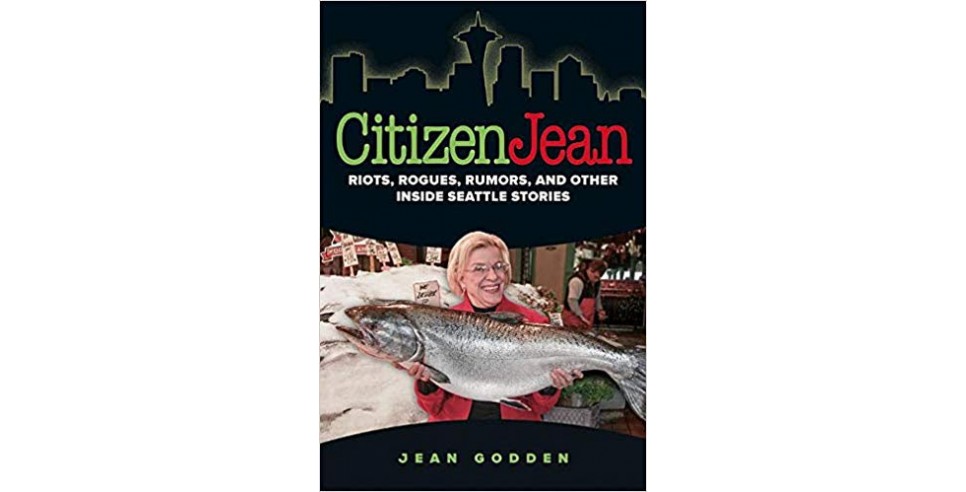 "Citizen Jean” is an apt title for the new book from always-cheerful journalist and former Seattle City Council member Jean Godden. Godden’s well-told stories reflect a less fearful era, and political intrigue that does not concern terrorism. Instead, it revolved around civic conspiracies to create new urban developments, like the secret plot to make the site of 1962 Wold’s Fair into a lasting civic center. Godden entertains with quirky characters like the World Fair organization’s only high-profile female official: Despite coming from a small conservative town in Eastern Washington, she ran the main musical venue promoting “girlie shows and nudity.”

Most of “Citizen Jean” is devoted to Godden’s 29 years as a journalist for Seattle’s two daily print newspapers, The Seattle Times and the now online-only Post-Intelligencer. Godden ushers her readers into how newspapers struggled to survive with the rise of digital media. When Godden started working at the P-I in 1974, the newspaper printed seven morning editions. But even after entering into a joint operating agreement with The Seattle Times in 1983 — with The Times managing almost all operations — the P-I’s print edition ended its run in 2009.

Before leaving the P-I in 1991, Godden had served as the business-page editor, editorial-page editor and finally a columnist. She knew the most visible and powerful politicians in the state, and “Citizen Jean” joyfully jabs them with her pen. An entire chapter is devoted to dismembering Washington state’s first femalegovernor, Dixy Lee Ray. Godden recalls Ray’s outrageous statements, such as her dismissive response to environmental concerns over a possible oil spill by supertankers entering Puget Sound: “Oh, you people go all gooey over ducks.”

Former Seattle Mayor Charlie Royer receives kinder treatment. Godden praises him for initiating bond issues to build public housing for low-income and senior residents. Nevertheless, Royer was an easy target for Godden’s skill for evocative observations she honed as a columnist. She notes “the numbers of comely young women he appointed to management positions,” and adds that “City Hall, some said, was beginning to look more like a ‘dating bureau then an urban government.'”

Loyal to her union, Godden joined a strike to shut down The Seattle Times. Advocating for better employee-working conditions continued after Godden became a Seattle City Council member; she was an early supporter of paid sick leave and a prime sponsor for paid parental leave.

In 2003, as the newspaper business declined and layoffs increased, then-71-year-old Godden decided to run for city council, at an age when most people hope to be retired. Under the tutelage of campaign consult Cathy Allen, she challenged first-term incumbent Judy Nicastro. Although Godden had name recognition, Nicastro’s other primary challengers dismissed her as too old; the challengers split the city’s respectable daily newspapers’ endorsements, Nicastro got the hip Stranger’s, and Godden was left empty-handed. But Godden still came in second, with a margin of 175 votes out of 115,000 cast and went on to win the seat.

The last four chapters of Godden’s book cover her three terms on the council, which overlapped with my five. I saw her being strategic, keeping to the middle of the road when possible, perhaps to influence the outcome. As a consequence, only six times in 12 years on the council did she cast the lone opposing vote.

She describes her successes increasing various taxes to keep services from being cut; providing lower water rates for low-income and senior customers; and requiring broader commercial recycling standards. Her most widely acknowledged achievement was providing paid-parental-leave benefits to city employees.

Godden ends her book by encouraging women to run for office. She even campaigned for another client of Allen’s, a young, confident woman with an accomplished civic record running against an older male fellow council member. Fortunately for me, she lost. I kept my seat and continued to work with Godden to pass legislation, like the $15 minimum wage, which capped off her record of accomplishments.

Nick Licataserved on the Seattle City Council for 18 years until his retirement in December 2015 and is founding board chair of Local Progress, a national network of progressive municipal officials. He can be reached at www.becomingacitizenactivist.org