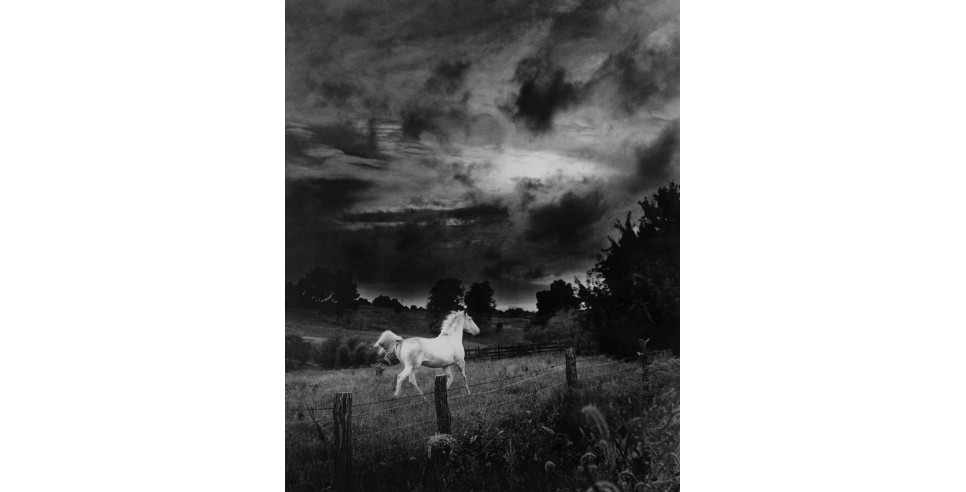 My white horse was galloping on a beach the first time I saw her. I have been told that very few horses are truly white. Most horses that appear to be white are actually light grey. The girl who rode on the horse was blonde. Her long hair blew behind her back like silver streamers. The girl was running away from the uncertainty of trouble at home. She rode fast along the beach. The white horse would bring her to freedom.

I  knew this horse was wild because it galloped so fast.

I was watching an old black and white TV in the Spring of 1965. I was nine when I watched the scratchy film with the blonde girl and the white horse. I imagined I was the girl and the horse was mine. I gathered from the film that the white horse was a mare. The movie had been made in Czechoslovakia and had subtitles. I do not know the name of the film. I do know the girl would not have found freedom had it not been for the wild horse.

The wild horse stayed with me. I knew I would only find freedom when I rode my wild horse.

My fourth grade teacher took me to the side one day and told me I had writing talent. She told me I could write anything. My teacher was blonde like the girl in the Czech film. I imagined her riding a horse. My wild horse delivered me from a world I did not understand. My mother was sick in 1965. Other years too. She was sick for most of my childhood. There were days when I thought she would die. My sister was also sick. She had a very high fever. I thought she would die. Doctors made house calls back then. The doctor said she had the mumps. Encephalitis set in and caused her to become deaf in one ear.

I have embraced this white horse for most of my life. It’s been many years since I saw the Czech film and I still do not know its name. I do know the horse has delivered me to freedom when all other forms of life could not. I also know riding the wild horse is a metaphor for my work as a writer.

I was recently in Santa Fe. I visited the Monroe Gallery on Don Gaspar Avenue. I saw a photo of a white horse on the wall. The photo is called “Stormy” and it was taken by the photojournalist Bill Eppridge in 1958. I can’t describe “Stormy” well enough to do justice to the photo. I can only say this white horse is running wild against fierce wind. Black funnel clouds twisting in the shapes of fingers are touching the sky. A storm is fast approaching. The horse is running for its life. A white gap opens up in the west. The sun setting in the distance could care less about the impending storm.

Finding the white gap in the sky and riding west into the setting sun has been the story of my life. I am not the only one. All artists ride a wild horse.

Bill Eppridge took many photos during his amazing career as a photojournalist. He captured the Beatles when they first came to America. He covered wars and the civil rights movement. He was at the funeral with James Chaney’s family.  James Chaney and two young men from New York had been murdered by the Ku Klux Klan. Bill Eppridge was on the campaign trial with Bobby Kennedy when he was running for President. Bobby Kennedy is riding in a red convertible in one photo. He is flanked by former prizefighter Tony Zale and three of the L.A. Rams’ Fearsome Foursome. Bill Eppridge was also there that night in Los Angeles when Bobby Kennedy was killed.

You might say that Bill Eppridge was riding his own wild horse. He captured much more than momentous events of the Twentieth Century. The beauty of his art is the way he captured people who had the courage to work hard to create a better world.  We do not need to experience loss for who were in the Twentieth Century. Nor do we need to grieve for who we could have been had our heroes lived. The artistry in Bill Eppridge’s work gives us hope that any one of us can be brave.

Powerful art creates a connection among all parts of ourselves. A lasting bond is formed between who we once were and who we still are. I remember my wild horse as though I’ve seen her yesterday. She has stayed with me all of these years. She is here with me now as surely as she is with me everyday. I still do not understand the world. My wild horse takes me to parts unknown and I am not afraid.

EDITORS NOTE: The Monroe Gallery of Photography in Santa Fe, New Mexico is exhibiting “The Legacy of Bill Eppridge” from September 30 to November 20, 2022. For more information, please see the gallery’s website: https://www.monroegallery.com. Please note that the gallery is not a client of Xanthus Communications LLC or PR for People®. Patricia Vaccarino and her husband Joe Puggelli, however, did buy a signed print of Bill Eppridge’s “Stormy.”

Photo Credit: "Stormy" is reproduced with permission of the Estate of Bill Eppridge. All rights reserved. Courtesy Monroe Gallery of Photography.