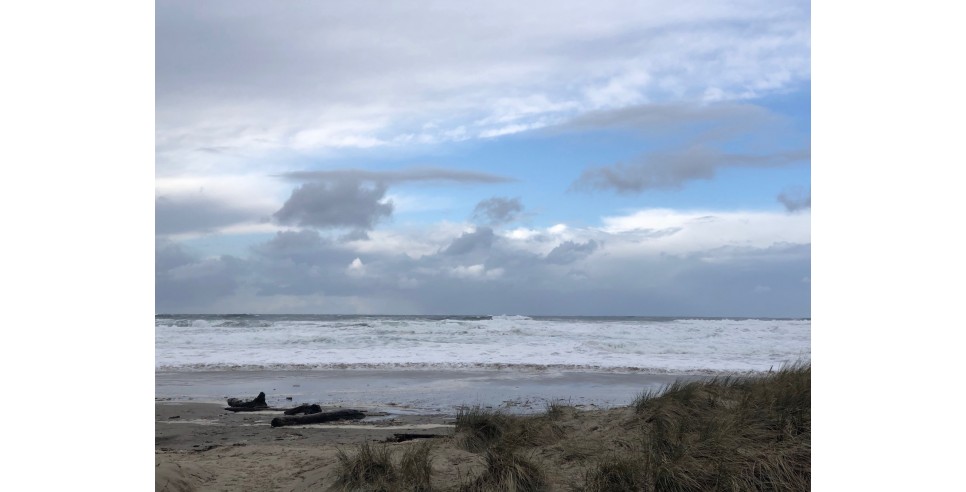 Waves sneak up to the shore from nowhere. Mountains of water advance, attacking like a marauding army. Churning angry white foam, the King Tide has arrived on the north coast of Oregon. Water levels rise higher and tides grow stronger. Some tides crest far higher than others. Swell after swell, rising and falling, an ache and a sigh, reeking of salty spray. Sneaker waves suddenly smash against the beach with a boom like thunder. The power of water washing over us can take us on an unwanted ride far out to sea. Sudden fierce currents sweep victims away. Never turn your back to the ocean.

Sneaker waves are known to be capricious, randomly snatching one person and sparing others. The first sneaker I have known crested over Hazard Rock in Narragansett, Rhode Island. Jagged shelves of granite rock form misshapen landings that cascade haphazardly down into the Atlantic Ocean. These are slipperiest of steps, going nowhere, jutting deep into water. Even the most surefooted can fall.

Hazard Rock has many stories of those who were swept away. Once a sneaker wave crashed into a bridal party being photographed. The bride disappeared in one swoop and was dragged out to sea. Her stunned groom and others were soaked but otherwise untouched. Hazard Rock is a siren inviting chance, a thrill, tempting fate, the unknown, all of that, and the ultimate ride out to sea. Hazard Rock lays claim to Druids and seafaring legends that explain too many drownings to count to date.

The ocean can be a calm beauty, offering a slight breeze in the thickest summer heat. The first time I saw the ocean I was a child standing on the beach close to the Million Dollar Pier in Atlantic City. The Atlantic Ocean seemed a lot bigger back then. The ocean offered me a chance to float on my back under blue skies and the full sun. The warm water lapped my small body like kisses from the sun. I thought the ocean was my mind, ever expanding and changing, always in a state of flux, bigger than everything else in the world. As long as I had my mind and a path to the ocean, I was the world.

King Tides on the north coast of Oregon do not invite the chance to float in warm water under a full sun. The water is cold enough to kill. During high tide the beach is gone, drowning in water. A hike along the shore means warily walking on a windswept road, staying vigilant, far from killer waves. Every winter the sneakers claim a body or two. Last year two small children and their father were swept out to sea. The father lived. The children did not.

The ocean is as majestic a force as it is terrible. I feel awe for the ocean and at the same time I feel terror. This coupling of fear and awe keeps me humble. As long as I am alive, I am part of the ocean and it is part of me. Most nights when the sun is going down, I long to walk along the sand where the frothiest fronds of water span wide, eventually coming to the end of their run. It is in these moments that I remember, with no warning, the ocean can capsize my body like an old creaky boat and carry me out to sea.

I hold the ocean close to my heart, both a friend and an enemy. The ocean is far stronger than I, a mighty force to reckon with when all other forces in the universe are tame, benign by comparison. I stand close to the water’s edge, admiring the uneven, gaping tides flowing to and from the shore. Showers of light filter from the clouds in the distant horizon. Dark pockets of fierce grey clouds form a queue behind the white and the silver light and the slimmest crevice of blue. The wind blows me away from the water, sweeping sand as fine as mist into my eyes. I cannot see but I can often hear the ocean calling to me.