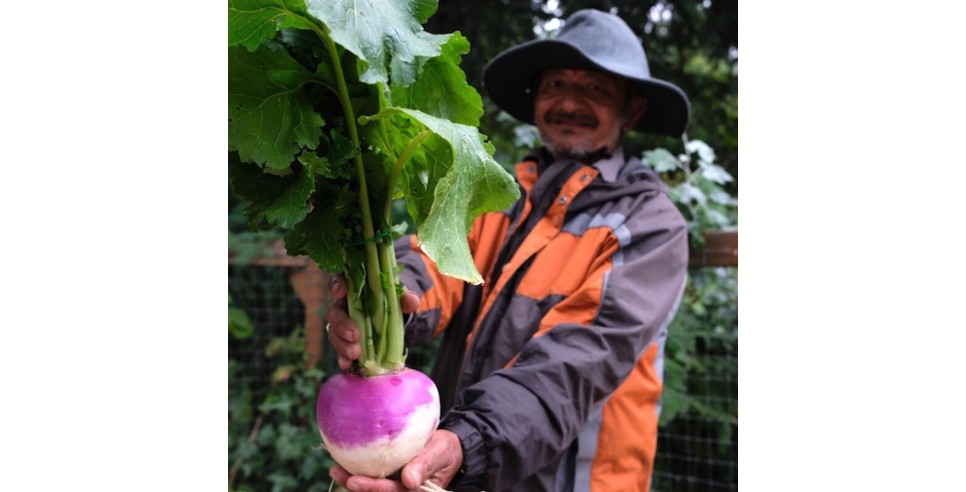 We are just two years shy of the fourth centennial of one of America’s most cherished American traditions – Thanksgiving. That original harvest feast was celebrated in 1621 by three-score Pilgrims and a Native American contingent twice that size. The Wampanoag had welcomed the desperate English immigrants to their shores, shared food with them, and taught them American agricultural methods.

Even now, in what seems to be a grievously divisive moment in the history of the United States, it’s important to note that in some places in America, the tradition of welcoming newcomers and sharing foodways continues.

Food Innovation Network is one great example. Serving the low income and demographically diverse communities of SeaTac and Tukwila, Washington (which long have been ignored by Seattle, the glittering metropolis just to the north), FIN is a farm to fork collaboration that has brought together partners from across the food system. Committed to ensuring that immigrants, refugees, and other under-served populations have access to healthy and culturally relevant food, FIN supports local growers, offers training to aspiring food entrepreneurs, and creates sustainable new markets where they are most needed.

There are many different facets to this impactful work, which is carried out by a small but mighty all-female staff led by Program Director Kara Martin.

FIN offers grocery store tours to newly arrived refugees to help them navigate unaccustomed ways of locating and buying food. The organization also holds workshops for newcomers to learn about other food-related resources, from food banks to community gardens and school lunch programs for kids.

FIN facilitates a local urban agricultural network to help growers locate arable land and partner with landowners who are trying to preserve open space in an area that has been subject to rapid development. But it doesn’t stop there.

“We’re working on a pipeline between farmers and food businesses,” Martin says.

To wit, FIN also operates a seasonal farmers market in Tukwila and a farmers stand in SeaTac – both of which can accept federal Supplemental Nutrition Assistance Program (SNAP) benefits for payment.

Another core project is FIN’s Food Business Incubator, which offers entrepreneurs who come from low income and immigrant communities coaching in how to develop their own catering businesses or marketing channels for food products.

This has been a focus for FIN’s cultural outreach specialist, Njambi Gishuru. Born in Kenya and educated in England, Gishuru helps with documentation for new entrepreneurs and provides mentoring. But she also stresses the ultimate importance of letting participants develop their own strategies and make their own decisions.

“We’re addressing health and economic disparities by putting power back in their hands,” Gishuru says. “Taking ownership of their community food system is empowering.”

The Food Business Incubator has resulted in the launching of a dozen businesses since 2017.

And in 2020, after years of planning and fundraising, FIN will debut its largest project to date. The Tukwila Village Food Hall will open as the community hub for a new mid-rise development of affordable and market-rate apartments. The Food Hall will include a commercial kitchen, five food retail stalls, a community dining area, and accommodations for other food businesses. The cuisine will reflect the origins of the entrepreneurs FIN has mentored – Congolese and Nigerian, Kenyan and Kurdish, Mexican and more. And it will be sourced with specialty produce grown by the local urban farmers FIN has partnered with.

Nearly four hundred years after the Pilgrims and the Wampanoags sat down to feast together, FIN’s farmers and food entrepreneurs are keeping alive the tradition of extending hospitality to newcomers and sharing food.