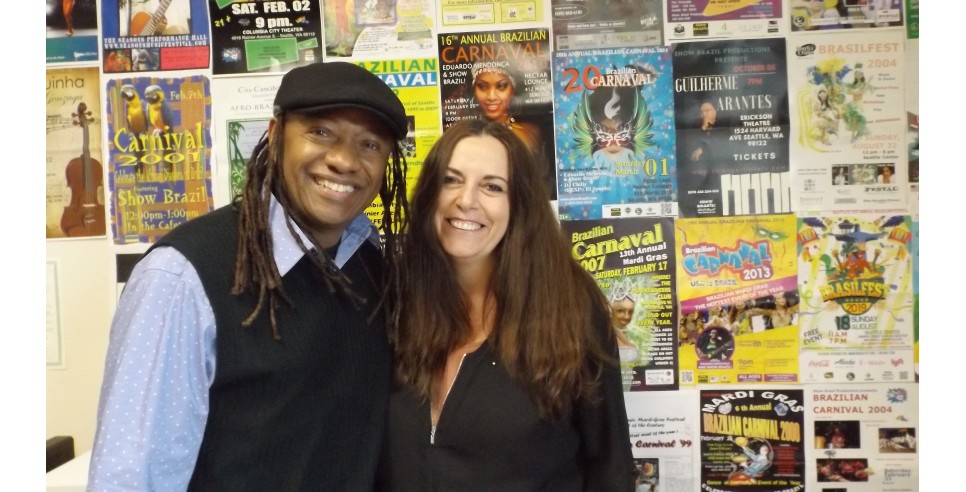 Eduardo Mendonça has performed for Nelson Mandela, Pope John Paul II and the Dalai Lama. He himself descends from a royal African family.

But the hardworking Brazilian-born musician doesn’t rest on his laurels. With his wife, Ana Paula Mendonça, the naturalized American citizen founded Show Brazil Productions, a Seattle-area company that promotes Brazilian arts and education opportunities throughout the United States and Canada. Mendonça’s performance schedule takes him to venues throughout South America, North America and South Asia. Sometimes he appears as a soloist, and other times he’s joined onstage by more than a dozen additional musicians and dancers to perform the rhythmic Afro-Caribbean musical genres that are popular in Mendonça’s birthplace of Bahia in northeastern Brazil.

It is precisely that joyous, spicy fusion of styles that is informing the Mendonças’ most recent undertaking. For the last year, they have been working on a pilot project for a new nonprofit organization called the iBuildBridges Foundation.

As the Music Director for this effort, Mendonça is drawing not only on his own rich heritage and musical career, but also on his experience as someone who has personally witnessed some of the world’s great leaders in action.

iBuildBridges brings together a dozen young musicians, ages 15-25, from a broad swath up and down the I-5 corridor in the Puget Sound region. They were admitted into this program by audition, and Mendonça and his colleagues at the iBuildBridges Foundation (co-founders Toni Clark and Richard Bell, and executive producer Gary Wenet) were intentional in selecting participants who represent not only different musical traditions, but also a variety of cultural, political and religious backgrounds.

Now, under Mendonça’s tutelage, they are learning to collaborate with one another and create new music. But before they even pick up their instruments, they begin with dinner and conversation.

“I make them wash their hands,” she says, “so they call me Mom now.”

“iBuildBridges is a movement,” Mendonça says. “It’s about how we can respect diversity.”

So by the time they start to work on their music, all of the participants already know they have been heard.

The musicians bring in their own compositions to get feedback from their peers, but they also collaborate on creating new pieces together.

Rehearsals are fun and open to creative experimentation, but there are expectations, too. A code of conduct was developed collectively: Be sober. Be punctual. Be kind. Hug often.

And at the end of every rehearsal, everyone – including the Foundation executives – pitches in to clean up.

“There are opportunities for leadership every time we meet, every time they perform,” Mendonça says. “We want to make sure they appreciate and have ownership for what they do.”

iBuildBridges Foundation backs that up by paying the musicians for their time spent in rehearsal, and for their performances. They’ve already appeared at Seattle’s Benaroya Hall and later this year, they’ll be performing at Northwest Folklife and then traveling to Chicago to take part in an event produced by Interfaith Youth Core.

Mendonça says that the Foundation hopes to be able to expand this program to other parts of the country. “It provides a safe place, it offers financial support, and everyone walks away from the experience with more confidence because they have been heard and we value the work that they do.”

By learning to listen to one another and to create and perform music together, he says, these young musicians come to understand better not only where they come from, but where they want to go.