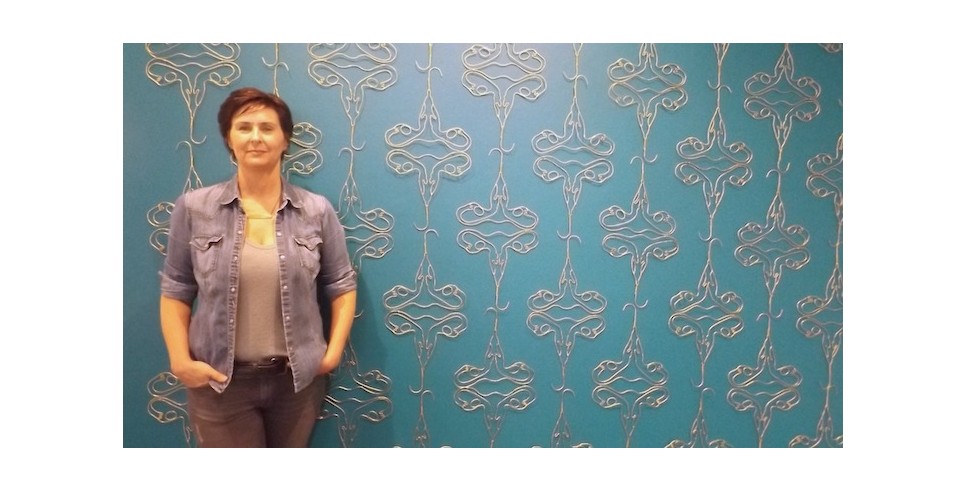 Holly Ballard Martz has always been an artist, but she didn’t start out creating work with any specific political agenda.

That all changed seven years ago, when a family member suffered through a debilitating bout of depression and anxiety, and encountered numerous obstacles in her quest to get the help she needed. That’s when Martz’s work took a significant turn.

Frustrated by the dysfunction she saw in the American health care system, Martz began to recognize how important it was to speak up, even about difficult things.

“If you don’t talk about it, you can’t change it.”

So she started creating pieces that identified and commented on the entrenched relationship between money and policy-making. The change of presidential administrations in January 2017 further energized her work.

A far cry from the cheerily colored, two-dimensional pieces she’d produced earlier in her career, Martz’s current work consists of large, bold, mixed media sculptures that challenge viewers to examine their own patterns of behavior.

Over the summer, nineteen pieces were on display in her one-woman show called “Pattern Recognition” at ZINC contemporary, a gallery in Seattle’s Pioneer Square neighborhood. Many of those pieces will move on to ZINC’s sister gallery in Edmonds, Washington, later this year.

Before the Seattle show closed, Martz led a tour of her work and commented on the inspiration behind the pieces.

“Triage” rests on a low-lying plinth you might stumble over if you aren’t watching where you step. It consists of a stretcher frame refitted in a brass weave and bearing the stenciled letters “Sweet Land of Liberty.”

“From the inception of this country,” Martz began, “starting with the genocide of indigenous people, and enslavement of black people, and women not having the right to vote….”

She paused and shook her head. “Because of the systemic racism and sexism built into this country, people of color and women do not have the same destiny as white men. We need to assess what’s wrong and do the heavy lifting to work at correcting that.”

On a nearby wall, a vertically mounted triptych – also rendered in brass – is brightly illuminated. The piece features multiple shiny surfaces with stenciled slogans cut out in variably sized letters. It instantly attracts the eye, but it isn’t easily legible. And that’s intentional. It is only when you view look behind the the panels and see the stark shadows on the wall, that you’ll clearly be able to read “WAR IS PEACE,” “IGNORANCE IS STRENGTH,” “FREEDOM IS SLAVERY” – the brainwashing mantras from George Orwell’s dystopian novel, “1984.”

The piece, titled “Orwellian Stele,” is Martz’s warning to look beyond the sheen of superficial promises.

Out of all of the works on display, the one that demands the most attention is an installation that involves 110 wire coat hangers, each identically hand-bent into an elaborate shape and placed in an ornate pattern on a richly hued blue-green wall.

Seen from afar, the wall brings to mind the kind of frippery you might see in Victorian wallpaper, but the ornate wire shapes affixed to the wall are, upon closer inspection, outlines of the female reproductive system. And the background color echoes the vibrantly-hued Victorian-era wallpapers that contained arsenic and over time slowly poisoned unwitting inhabitants in their own well-appointed homes.

This installation is called “Danger of Nostalgia in Wallpaper Form (in utero).”

Martz isn’t interested in romanticizing the past, and she couldn’t be clearer about where she stands on reproductive rights.

“My belief is every woman should be able to choose if and when she becomes a mother. If you don’t have access to birth control and reproductive rights, that keeps women out of the workplace. That keeps women from being able to lead the lives that they want to lead. It keeps them financially strapped – you don’t have the economic choices that you would have if you are in charge of when and if you have a baby.”

For other pieces in this exhibit, Martz mixes implicit symbolism (in men’s starched shirt collars, plastic price tags and other items) with provocative juxtaposition – in every case, encouraging viewers to challenge their own biases, examine ingrained patterns of thought in our national psyche, and work toward positive change.

Pattern Recognition is part of For Freedoms’ 50 State Initiative, a non-partisan, nationwide campaign to use art as a means of inspiring civic participation in advance of the 2018 midterm elections.